We use tools, such as cookies, to enable essential services and functionality on our site and to collect data on how visitors interact with our site, products and services. By clicking Accept, you agree to our use of these tools for advertising, analytics and support.
Privacy & Cookie policy - Opt In / Out
Accept ×
EN 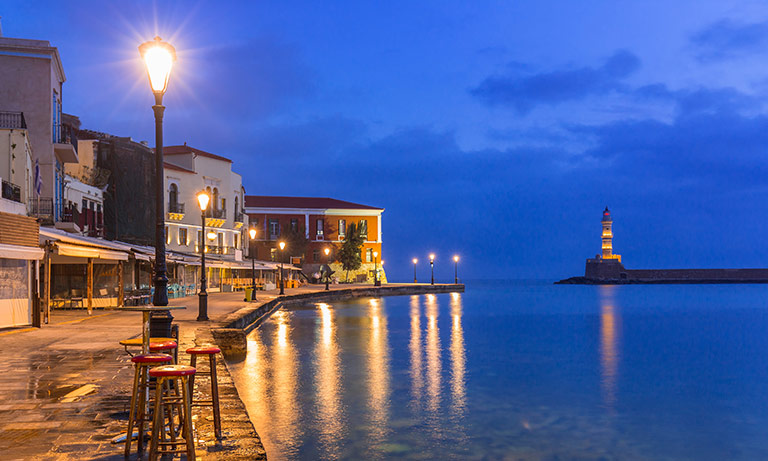 From its historical museums and architecture to restaurants with spectacular views of the old Venetian harbour, Chania is undoubtedly one of the best places to visit in Crete. As you fly into Chania airport and see the extensive landscape of the old city surrounded by mountain villages, the national park of Samaria and many other gorges and archaeological sites, you will quickly realise how much there is to see and do in this beautiful city.

Although Chania has a quite extensive transport system in the form of busses, this often means lengthy waits at bus stops and coupled with the fact that bus schedules can change unexpectedly and that there are virtually no busses running from the airport itself means travelling around the island can be quite frustrating.

Benefits of booking with Rental Center Crete in Chania Airport

So why not take the stress out of travelling around the beautiful city of Chania and surrounding landscapes by hiring a car from the airport. Not only will you avoid the hassle of public transport, you get to see this stunning city your way and on your own terms.

Rental Center Crete has gained a reputation over the years as the best car rental center in Crete and having a base in Chania airport allows you to step off the plane and straight into a luxurious car, ready to transport you around the winding streets of Chania.

Just some of the services Rental Center Crete offer are:

So, from the time you collect your hire car at the booked pick up date till the time you say ‘adio’ to us, we, at Rental Center Crete will promise to offer the best service you have ever experienced from all car hire companies.

Where to pick up your rent a car in Chania Airport

Receiving your booked car at Chania Airport is pretty straightforward. Most of the car rental companies operate either within the arrivals hall or just outside. We are located just a few hundred meters from the arrivals terminal. Check this video on how to find us at Chania airport.

01 Jun 08 Jun 7 days Chania Airport
⚠ All charges are FINAL! No hidden charges or extra insurances upon vehicle collection.
What you book is what you pay.
Check out our Special Offfers

972 ratings in Chania Airport with average score of 96.8%

Everything was super easy from the moment i was collected at the Airport, to driving away with the vehicle, to being taken back to the airport at the end. Emails and communication was quick and helpful also. I would highly recommend

The collect and return service is excellent. From the booking and returning the car, everything was easy. The employers are very friendly. Would defenitively rent a car there again.

All my details are collected before I got there. This made the admin after I've landed short and sweet, and meant I could get on with my journey quicker. Value for money also with insurance covered, this meant peace of mind during the trip.

I really liked the fact that insurance and a second driver was included in the price. This made the whole process much simpler and me feel a lot more comfortable in booking with you I had a query about one of the roads during our trip which I got a quick response to via WhatsApp, which was very helpful and easy.

We picked up the car from Chania airport. Joanna was waiting for us in the terminal when we exited baggage reclaim. She is really lovely. Very helpful and friendly. The car was almost new and in excellent condition. Very clean. The whole process was very smooth. We can't thank the Chania staff enough for the helpful way they looked after our luggage for us in the time between our having to vacate our villa and the check in time - which was 5 hours. Huge shout out to them.

its an excellent service. By phone and in presence. I like that we were picked up at the airport and that we were brought back at the end of the trip.

How much is the cost to book a rental car in Chania Airport?

On average a car rental in Chania Airport costs €28 per day.

Can I return or pick-up a car after office hours?

Yes for airports. Please check with the rental location when picking up your rental vehicle for exact procedure. Vehicles must be returned during branch business hours in office locations. Dropoffs in Hotels can be 24hours.

How can I obtain a quote for a vehicle rental in Chania Airport?

You can get a quote instantly online at rental-center-crete.com or by contacting our reservation team on +30 2810 240120

Do I have to pay an airport surcharge when you hire a car?

No, we do not charge any airport fees.

What do I have to pay attention to when hiring a car?

Check the level of fuel of the car, walk around the car and check for any existing damages, dents and missing parts, check the tyres and windows. If possible take some photos with a marked date on it to be able to prove you did not cause the damage.

What is the top tip for hiring a car in Chania Airport?

Book your car hire in Chania Airport at least 14 days before arriving and get the lowest possible deal.

This route connects some of the most beautiful beaches of Western Crete, and which also reveals unique ecosystems and picturesque villages to the visitor.

We begin at Kasteli Kissamos, the westernmost town of the island, and follow the road that leads to Topolia. Driving south of the village and somewhat lower than the road level, the entrance to the gorge of Topolia can be seen. The landscape is quite rugged and the stream bed full of vegetation; however, passing through the gorge is not particularly difficult, but it still requires about one hour. We continue southwards and after a few kilometers we enter a large valley where the "kastanokhoria" (chestnut producing villages) of the Municipality of Inakhori area are situated.

Driving along the road which leads into the valley we reach Elos, a village built in a verdant landscape with chestnut trees, plain trees and many fruit orchards. After Elos, the road continues uphill until a point where it reaches a characteristic small saddle; from there on we drive in a southerly direction. The view over the plain of Chryssoskalitissa opens up ahead of us.

We continue downhill now into the valley, through a landscape full of plain trees, large olive trees and orchards. After a little while we reach Kefali, from where we take the road that leads south, towards the Stamio bay. Then, the bare plain of Chrisoskalitissa stretches out before us. The Monastery of Chrisoskalitissa, which is dedicated to the Dormition of the Virgin and to the Holy Trinity, is built on a rocky elevation which offers a panoramic view. The church that we see today was built in 1894 and the icon of the Dormition of the Virgin is believed to be of the 10th century.

We continue southwards; passing through the plain, we come to the south-westernmost point of Crete, where Elafonissi, one of the most spectacular locations of the island, is to be found.

Elafonissi is a little low island which is in fact an extension of the land, given that the sea water at the strait which separates them is less than a metre deep. This fact enables the visitor to reach the island on foot. The white sand dunes that cover the biggest part of the island and the beautiful beaches with turquoise waters create an amazing ecosystem. On the rocky elevated western part of the island a lighthouse can be seen, as well as the communal burial site of the victims of the Austrian ship "Imperatrice" which sank here in 1907. It is also believed that a sanctuary of the god Apollo used to be here. Also, a massive massacre of revolutionaries, including a large number of women and children, who had taken refuge in Elafonissi, took place here by the Turks, in 1824.

Elafonissi today, together with the opposite shore, makes up a protected area of outstanding natural beauty. A little to the east of Elafonissi, one of the few cedar forests of Crete is to be found at the magnificent Kedrodasos beach. There are no facilities in the area, and the beach can be accessed by car only up to a certain point and then on foot, a relatively brief hike.