Everything You Need to Know About Frangokastello

Among the splendid, yet little known destinations of Crete, the small village of Frangokastello truly is enchanting for anyone who visits it. Travellers will uncover the hidden charm of this place, with its old castle, superb beaches, quaint atmosphere and nearby natural wonders. While it might be a little remote by any standard, it only adds to its authenticity, offering an unforgettable experience to those who stay there. Here are the most important things to know about the village of Frangokastello in Crete.

How to Get to Frangokastello?

Getting to Frangokastello by Car

The best idea is to reach Frangokastello with a Heraklion car rental and its airport. The trip will take over 2 hours along the north coast and then following winding roads over the mountains towards the south. The city of Chania is closer to this village, yet the trip will still take about one and a half hours. Before reaching Frangokastello, the road passes through the majestic Imbros Gorges. There are plenty of accommodation options and small restaurants in Frangokastello, yet it is not so developed due to its remoteness. 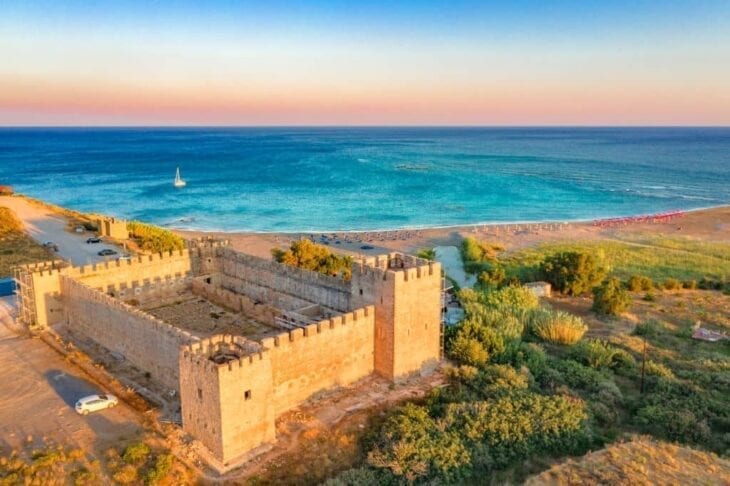 Getting to Frangokastello by Bus

As there are no buses that go directly to the village of Frangokastello and changing several buses can be tiresome, the best option would be to rent a car in Heraklion Airport. There is a public bus from Chania to Chora Sfakia and then local buses will get travellers to Frangokastello, but it will most likely take a long time. 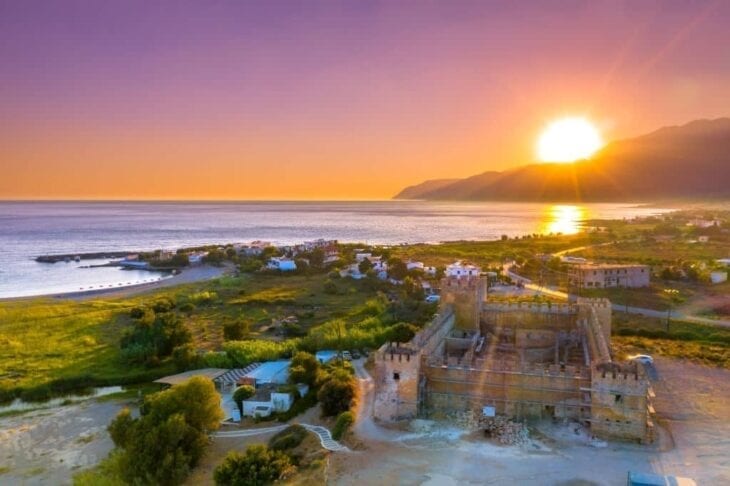 Best Things to Do in Frangokastello

The village of Frangokastello is quite remote, yet it offers all the beauty and hospitality that Crete is so famous for. Apart from the stunning beaches that line the southern coast of the island, there are also many other natural and cultural sights in the vicinity of the village. The beach of Frangokastello is one of the most charming in Crete, with clear shallow waters that go for almost 100 meters, making it the perfect destination for families with children. The beach has some beds and umbrellas, but not enough during the summer months, when it can become pretty crowded. The turquoise shallow water, the perfect fine golden sand and the mountain background with the ancient Venetian fortress makes it an amazing location for swimming and sunbathing. There are actually three beaches in Frangokastello, with the one below the castle (250 meters long) being the best but also the busiest and Orthi Amnos (700 meters long) being the quietest. The village offers plenty of restaurants and taverns, as well as smaller accommodation options. There are not many other water or land activities available in Frangokastello, but larger settlements like Chora Sfakia and Plakias are located nearby and there are even frequent daily buses to these places. 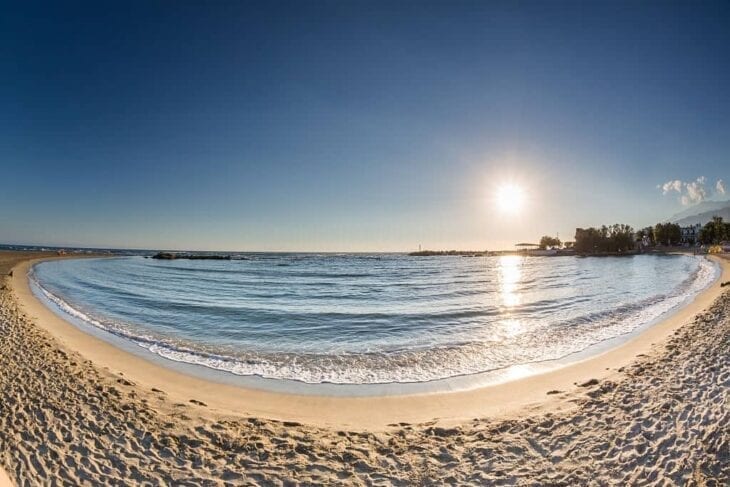 The village takes its name from the old fortress built by the Venetians in 1371-1374 and although named differently by its owners, it was always known as the “Castle of the Franks” or “Franco Castello”. Only the walls and towers remain from the Venetians, as the inner buildings and the battlements were built during the Ottoman occupation. During the Greek War of Independence, a battle was fought at this castle in 1828, yet the rebellious forces were massacred by the Turks. A beautiful legend continues from that day, with the ghosts of fallen soldiers appearing near the castle each May. These are called Drosoulites (dew men), as it has been explained as a meteorological phenomenon. Visitors of the castle can also see the ruins of the Early Christian Basilica of Agios Nikitas, as well as the small monastery and the beach of Agios Charalambos, with beautifully painted icons. 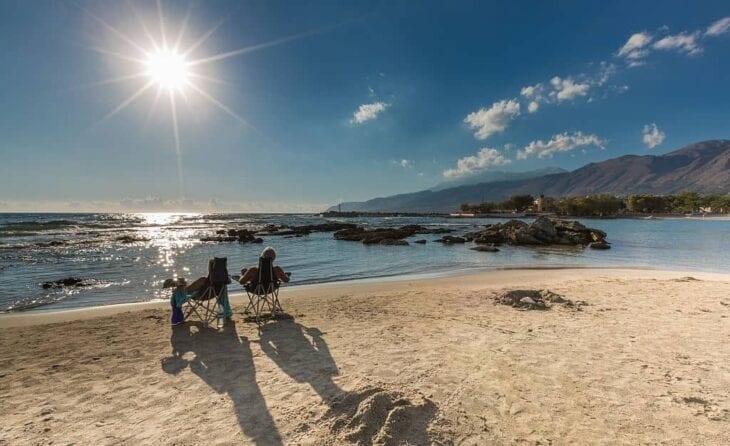 The majestic gorge of Imbros is located north of the Chora Sfakia and is crossed by an 11 km long winding road. It is one of the most famous and popular on the whole island, only the Samaria Gorge being more visited. It is easier to walk from the northern village of Imbros towards the south, as the path goes down towards the sea, but it can be done either way. It takes about 2-3 hours to walk the 8 km path and it can be done by the whole family as it has an easy difficulty. Along the way, there are plenty of amazing narrow sections, unique geological formations, as well as flowers and plants. This is an especially pleasant trip during the hot summer days, as there is shade inside the canyon for most of the time. The drive along the road above the gorge is also extremely thrilling, with stunning views of the canyon and the sea. The nearby Sfakia Canyon is also worth exploring, although lesser known and wilder, it is equally spectacular. 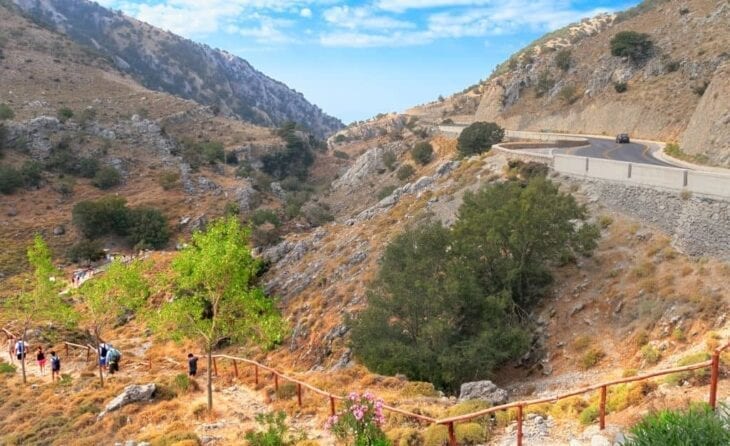 Hike or drive over the Kallikratis Mountain

The village of Frangokastello is shadowed by the imposing White Mountains of Kallikratis and travelers can either hike it to get breathtaking views of the sea or drive along one of the most winding or steep roads imaginable. It is one of the most thrilling roads in the whole of Crete, with 11 km filled with 27 hairpin turns that get you from sea level to 800 meters in less than 30 minutes. There are some very dangerous sections that need extremely careful driving. The small, yet very steep and impressive gorge of Kallikratis is an excellent hiking destination, a beautiful path of 6,5 km connecting the villages of Patsianos near Frangokastello and Kallikratis.

While for most people who stay in Frangokastello, the several beaches of the village are enough for a whole holiday, it is good to know that there are also other charming beaches nearby. Towards the east, the beautiful beach of Lakki is composed of small sandy coves separated by rocky piers. The beaches are very quiet and shaded. A little further are the long Rodakino Beaches, a little pebbly but usually very quiet. Other small but enchanting beaches towards Plakias include Korakas Beach, Souda Beach and Ilingas beach. West of the Frangokastello village, visitors can reach the extremely remote and smaller beaches of Filaki and Amoudi. There are many other small beaches that can be discovered and are practically unknown to most tourists. 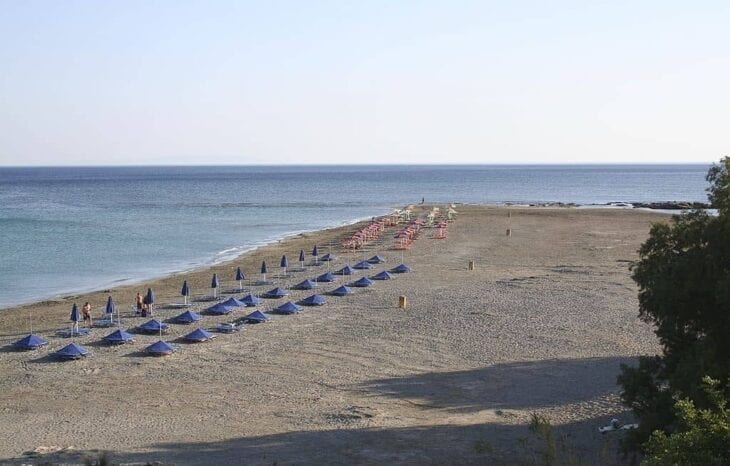 Where to Stay in Frangokastello, Crete

Although a remote village on the southern coast of Crete, Frangokastello has plenty of accommodation options. Given its remoteness, there are no large hotels or resorts there and instead, a lot of small private villas, apartments and guesthouses can be found in the village and in nearby settlements. There are a few small hotels, but these are usually family businesses with charming atmosphere. If visiting Frangokastello during the high summer season, it is a good idea to book accommodation well in advance, as these place get pretty crowded.

Perfectly located just minutes from the western beach in Frangokastello, this location offers 10 superb studios that are perfectly equipped. There is an expansive garden with a beautiful swimming pool and a pool bar. 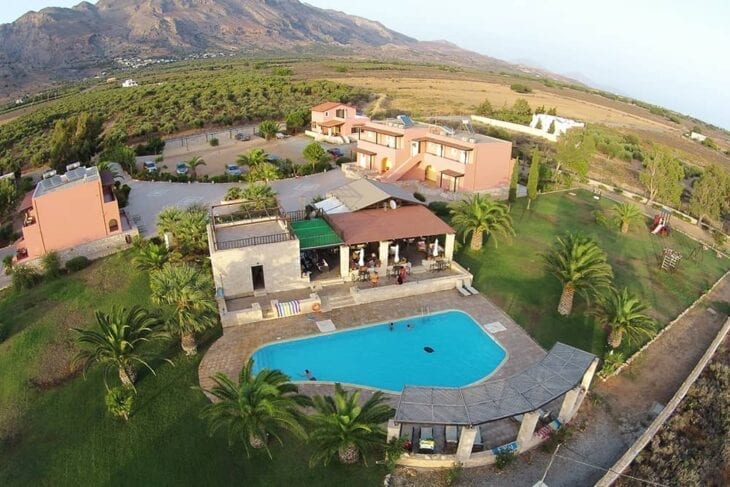 The amazing apartments are located just 700 meters from the charming Orthi Ammos beach in Frangokastello. Set in the middle of a lush garden and featuring a swimming pool, these studios and apartments have large rooms with kitchenettes and refrigerators. 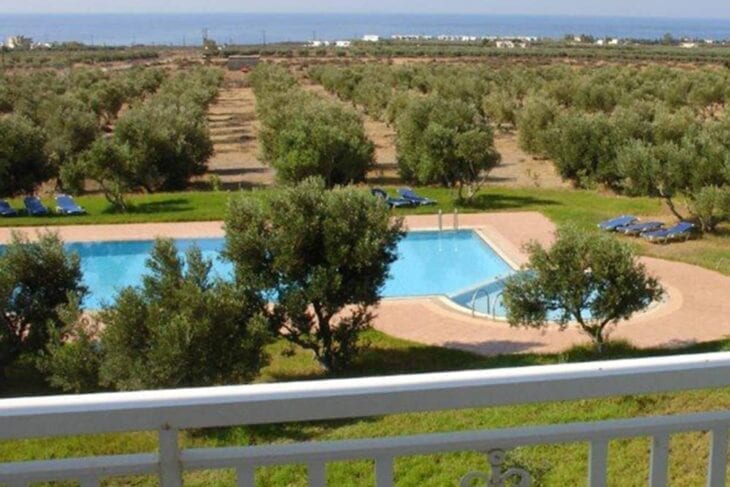 Located just two minutes away from the beach, these self-catering apartments feature amazing views of the sea or the mountains, as well as an enchanting garden, free bicycles, a tennis court. The rooms are extremely well equipped and feature kitchenette and refrigerators. 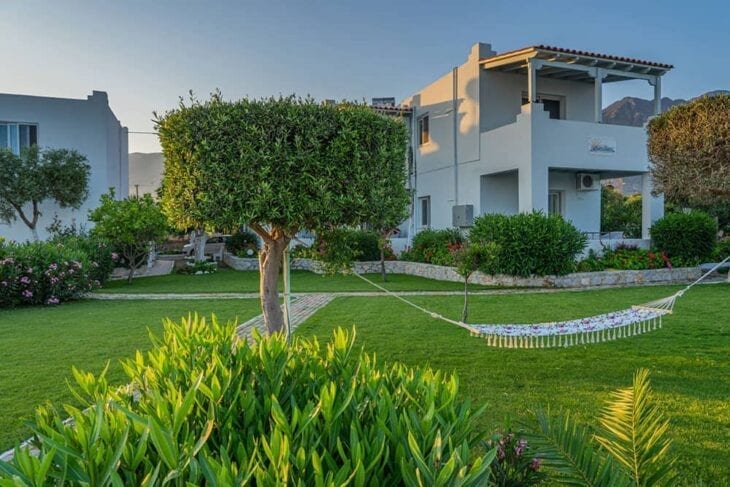 Where to Eat in Frangokastello

It is located in the center of the village, a short walk away from the beaches and it offer delicious fresh food in a nice atmosphere. Visitors usually choose the traditional Greek and Mediterranean plates.
☏ +30 2825 083562

It is definitely one of the most appreciated restaurants in the whole region, located just off the beaches and a short walk from the fortress. It offers delicious traditional recipes, including lamb, vegetables, seafood and more.
☏ 30 2825 092093

This unique restaurant in Frangokastello is located right next to the Venetian Castle, with amazing views of the beach and the sea. It offers delicious Greek recipes like salads and seafood, but also pizza and refreshing drinks.
☏ +30 697 909 1339

Weather is quite nice in Crete most of the time, except a few months in winter when it is too cold and humid for the amazing beaches on the island. The peak of the tourist season is in July and August, but this could also mean a lot of visitors in Frangokastello, making these the busiest months of the year. In conclusion, the best time to visit Crete and Frangokastello might be during the spring or autumn seasons (May, June, September, October), when there are fewer tourists and the weather might not be as hot as the peak summer.