Everything You Need to Know About Lendas

A peaceful and remote village on the dramatic southern coast of Crete, Lendas or Lentas is an astonishing destination if you are looking for a more authentic and traditional experience. Protected by tall mountains and two small peninsulas, the small village and beaches of Lendas are worth visiting for the superb atmosphere.

Still unspoiled by mass tourism, this secluded destination can easily be reached from the capital of Heraklion, crossing the island towards the south and descending from the impressive mountains of Asterousia along a winding and steep road. The village offers several interesting historical sights, yet the true attraction is its breathtaking location and surroundings. There is a small but charming beach right in the village, while the nearby coast has other stunning beaches, some of them preferred by nudists. There are also several guesthouses and taverns in and around the village, making it perfect for unforgettable holidays. You can find the most important information about traveling to Lendas from Heraklion and what you can experience in this fascinating destination of Crete. 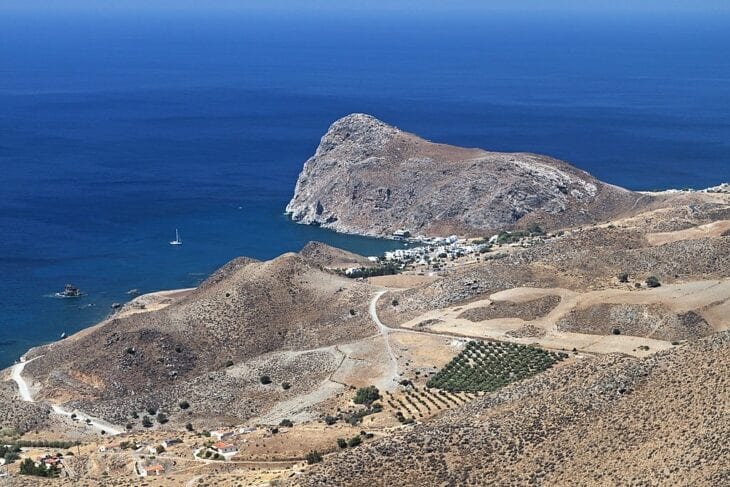 The village and beach of Lendas is located in southern Crete, about 73 km directly south of Heraklion. From the capital, you can easily hire a car and drive southwards through the village of the island, encountering beautiful landscapes along the way. The village is quite remote, accessible through a narrow and steep paved road that descends from the mountains, with the nearest town being Mires.

How to Get to Lendas

Getting to Lendas by Car

You can easily reach the village of Lendas with a car rental from Heraklion or its international airport. From the capital, you have to drive south across the island and the 70 km trip will usually take about one and a half hours. You will pass through the inner plateau of Crete with amazing traditional villages, finally descending from the Asterousia Mountains along a winding paved road all the way to the sea. Hiring a car to get to Lendas is definitely the best choice, especially given the remoteness of this village and many beautiful places you can visit nearby. You will find accommodation and several taverns in and near the village of Lendas, with more general services available in Mires Town. 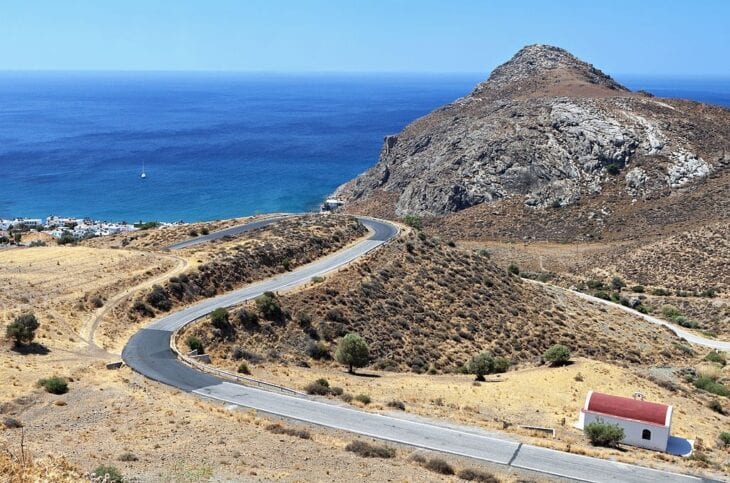 Getting to Lendas by Bus

There is limited public transportation to Lendas, with only one bus daily from the capital of Heraklion reaching it, usually during the tourist season. The trip by bus will take two or more hours and if you are car sick, the downward road from the mountains is quite challenging. The better option would be to rent a car from Heraklion and drive to Lendas directly. 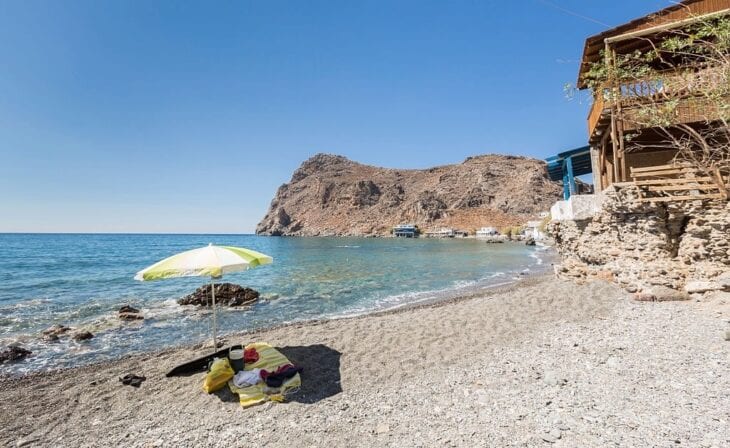 Best Things to Do in Lendas

The village of Lendas is quite secluded and atmospheric, one of the last places in Crete to find the ambiance of the past, mostly sought after by romantic travelers. Nevertheless, it is totally worth driving across the island and descending the 1000 meters altitude from the mountains to reach Lendas.

Almost enclosed by the majestic ridges of the Asterousia Mountains, with several small and enchanting beaches protected by the unique Lion Cape, as well as plenty of historical heritage sights, it makes for a complete and enjoyable experience. Built upon the ancient town of Levina, the village sits in a small cove, with the unique Cape Lion to the west, a protected site surrounded by legends. 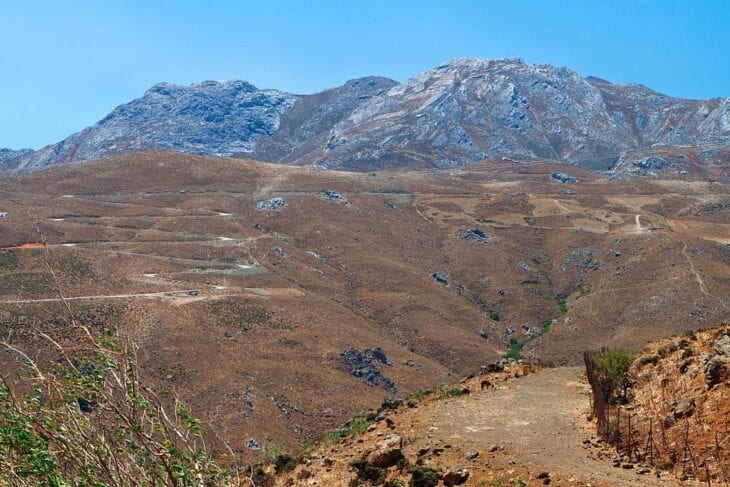 Right next to the cape, there is a splendid small beach with some umbrellas and trees. To the east of the village, there is a famous water spring that is thought to have healing properties and was known from ancient times. There used to be a large Roman temple dedicated to the god of medicine next to this spring, with people from Mediterranean visiting.

There are still some ruins left from the temple, with stones being used for the Byzantine church built on this site. There are also other Roman archeological sites from former baths in the area of the spring, making for an interesting visit. To the east of the village along a small track, you can find a larger pebble beach, but part of it is reserved for naturist holidaymakers.

There is also a beautiful beach to the west, on the other side of Cape Lion. There are also several other interesting rock formations besides the famous cape Lion, with legends saying they are the petrified animals of Cleopatra. Lendas has several small guesthouses, villas and apartments to rent, as well as a dozen or so taverns to eat traditional food. There is no petrol station in the village!

One of the most fascinating ancient sites in all of Crete and even Greece can be found in center Crete, on the plateau leading to the mountains of Asterousia and the village of Lendas. Easily reachable from Lendas in about an hour, this is a large archaeological area located along the road towards Mires Town, outside the village of Agii Deka. Inhabited for about five millennia, the ancient city of Gortyna flourished during the Roman era, when it was the capital of the province of Crete and Cyrenaica. 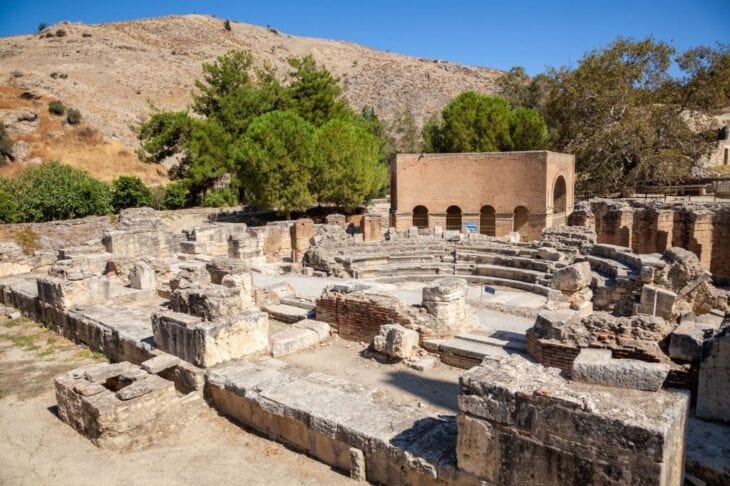 There is an abundance of attractions in this area that you can explore, some beautifully preserved temples, churches, buildings, statues and so on. Among the most interesting, you should not miss the Roman Odeon, the temple of Saint Titus, the Acropolis, the Praetorium, the statues exhibition, the ancient plane tree, the Basilica of St. Titus, the Temple of Apollo, the ancient olive groves and many others. It is worth spending a full day discovering the magnificent archaeological and historical attractions of Gortyna.

Located a few kilometers to the east of the village of Lendas, this impressive gorge actually starts high up in the mountains, but there is a relatively easier route by parking your car east of Agios Faulos port and heading down into the gorge, then exploring a few kilometers to the north and south towards the wild Trafoulas Beach. The gorge is quite impressive and extremely narrow, with large boulders and hidden caves.

Besides the splendid beaches close to Lendas village, if you have a car to explore the southern coast, there are many other idyllic beaches to discover. Most of them are quite secluded and difficult to reach because of the mountains, but their beauty is well worth the effort. Most of the times, you will have to drive up the mountains and then descend again along steep roads to reach the most interesting destinations. Some of the beaches you could visit from Lendas along the southern coast of Crete include Gerokampos, Paliomandra, Agios Onoufrios, Psili Ammos, Trypiti, Agios Ioannis, Agios Antonios, Kaminaki and more. Most of them are quite wild and unorganized, but this adds to their character and makes each new destination feel like an adventure. 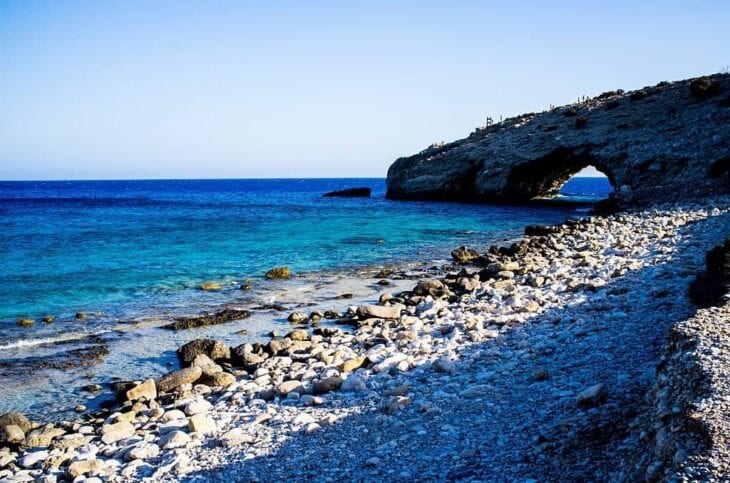 Where to Stay in Lendas, Crete

Given its remoteness and difficult access, the small village of Lendas nevertheless offers some nice accommodation options. There are no big hotels or resorts in or near the village, but you can find enough private villas and apartments to book and enjoy a more traditional Cretan experience. There are options for any budget, with decent prices for most accommodation in Lendas. Yet given the fact there are not so many locations, they do book out fast during the summer season, so you should book in advance.

Lentas Hotel
Located in the village of Lendas, this comfortable accommodation offers a 12-room bungalow hotel in the village, a 3-room studio right on the beach, as well as 8 studios on the beach of Dytiko. The rooms are basic but they offer all the necessary amenities.
☏ +30 699 333 3321
website

Athina Residence
Located in the village of Lendas very close to the beach, this is one of the most exquisite accommodation options in this destination, featuring studios for 2-4 people in four different buildings, with beautiful design, private bathrooms and some of them offering great sea views.
☏ +30 28920 95215
website

Niki’s Rooms
This family-run guesthouse offers comfortable rooms, studios and apartments that are fully-equipped and comfortable. It offers four different buildings and decent prices for visitors of Lendas, located very close to the beaches.
☏ +30 28920 95246
website

Where to Eat in Lendas

Poseidon Tavern
Located in the village of Lendas, this traditional tavern offers a delicious menu that includes Cretan and Mediterranean dishes, including fish and meat delicacies, all in a wonderful atmosphere.
☏ +30 28920 95305
website

The weather is quite nice for most of the year in southern Crete, although it does get quite chilly and rainy during the short winter months, while during the peak of summer, it can be unbearably hot during some days and especially in midday. Considering all these, the best time to visit the village of Lendas is during Spring and Autumn, where the weather is perfect and there are not too many tourists around as well. 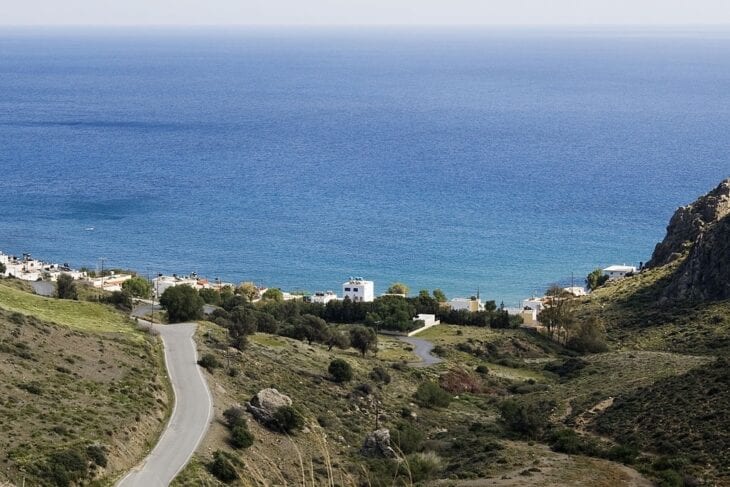