Everything you Need to Know About Listis Beach

Listis Beach lies on the shores of the Libyan Sea, on the dramatic south coast of Crete. This pristine and untouched part of the island is truly a remarkable place to visit.

Where is Listis Beach located?

Listis Beach is situated in the eastern section of the island, just east of the center. Ierapetra, the main town of southeastern Crete, is about an hour’s drive to the east. The closest towns are Kastri and Keratokambos, both to the east, with Kastri less than two kilometers away. To the west are the small villages of Agios Ioannis (about two km), then Krassas – 5 km away, and then, after another 3 km, Tsoutsouros.

How Do You Get to Listis Beach?

Listis is very easy to reach from the Nikos Kazantzakis International Airport in Heraklion. There is a Heraklion airport car rental directly at the airport, so you can go directly from plane, to car, and then straight on to the roadway, which is easily accessed. If you are arriving by boat, a car can be waiting for you directly at the port so you can be on your way the moment you disembark. 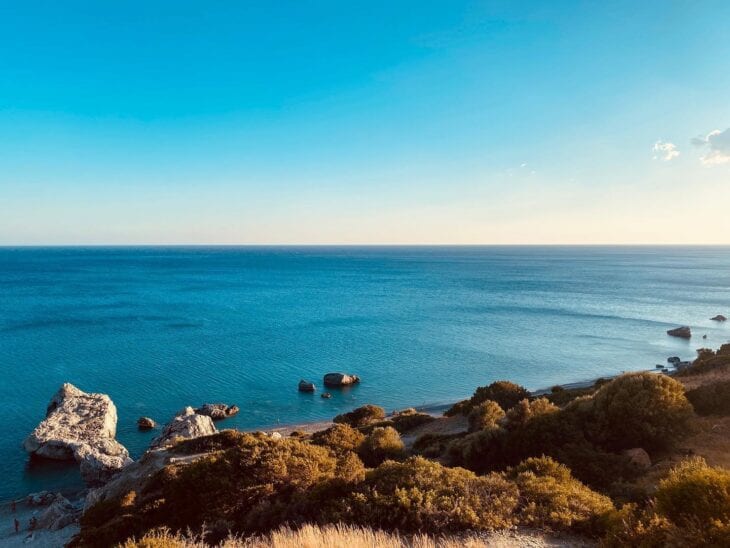 From Heraklion, two rural roads of equal length take you directly from the north coast of Crete to the south, through some magnificent and lush scenery and some charming agricultural villages.

If you prefer to reach Listis beach by public transportation, you can take the KTEL public bus service. Schedules can be found here.

The History of Listis Beach

It’s a charming story really how this beach got its name. The geology is enchanting; there are rock formations both on shore and in the sea to swim around. Additionally, there’s a large rock above the beach, called Listis Rock. This rock has several caves, one of which was said to shelter a bandit – the meaning of the word “Listis.”

Indeed, Listis beach does still feel like a hide-away. It’s both remote and welcoming – a little haven of shallow waters and sand for wonderful swimming.

Also read:  Psari Forada Beach Sidonia: Where is, How to get there and what not to miss! 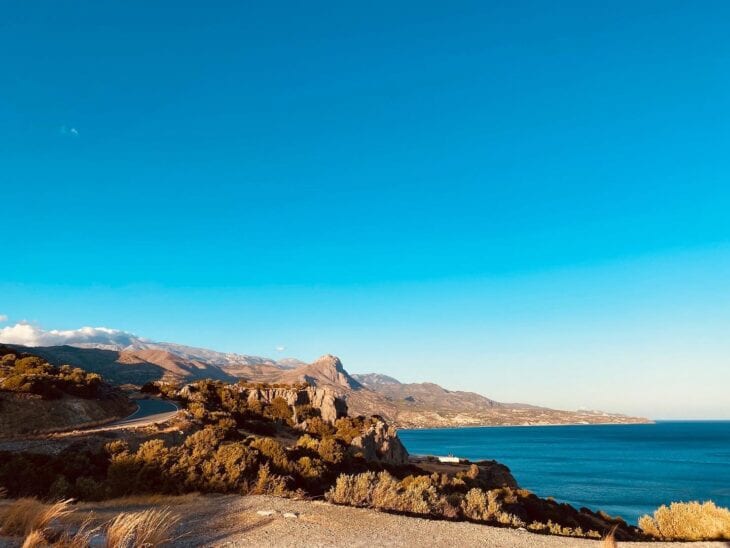 The region around Listis, though quiet today, is full of history. This area was populated from the Minoan era and through the Byzantine era, as the local sights will illustrate.

What to See and Do by Listis Beach

Those who seek out a remote and secret gem like Listis beach will find the slow pace of life is much part of its charm. There are plenty of things to do near Listis Beach. These include churches, ruins, and charming villages. And most of all splendid hiking – stunning as the beaches are, the pleasures of the land are many here. And you’ll be enjoying them in relative solitude. There are also some of the more famous destinations of southern Crete nearby – legendary Matala to the west, and the glorious Lasithi to the east. 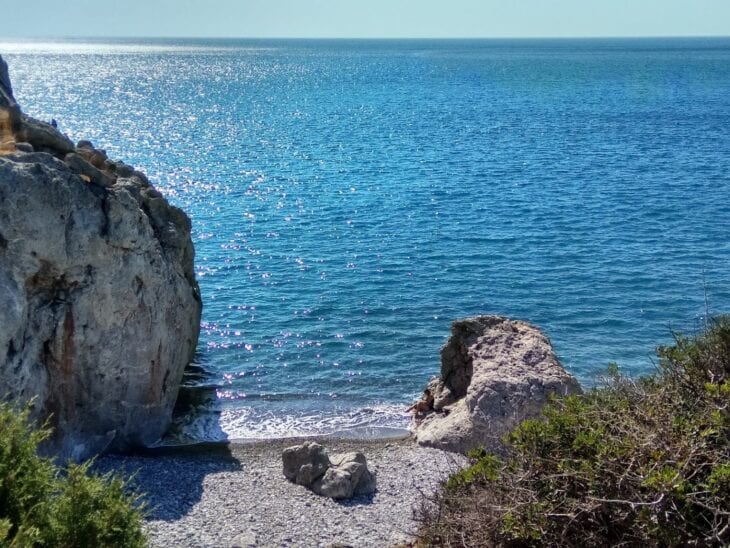 Listis itself is a fantastic beach, but it is just one of many. Those in the know seek out the wilder beauty of the beaches on the south coast of Crete, and Listis in an area with many excellent beaches close together. You can spend days beach-hopping with ease by car, and even on foot. Here are some of the excellent nearby beaches.

Generally speaking, the waters of the south coast of Crete on the Libyan Sea are known for being particularly inviting – clean, clear, and vivid in hue. They are sometimes a degree or two more refreshing than those on the north coast – welcome in the summer heat.

A little over a kilometer to the east is this long beach with a mix of sand and pebbles. “Skouros” means dark, and this beach takes its name from a large dark rock at its edge. This is one of many rocks adding interest to the beachscape. The beach has some natural shade from tamarisk trees – an added bonus. 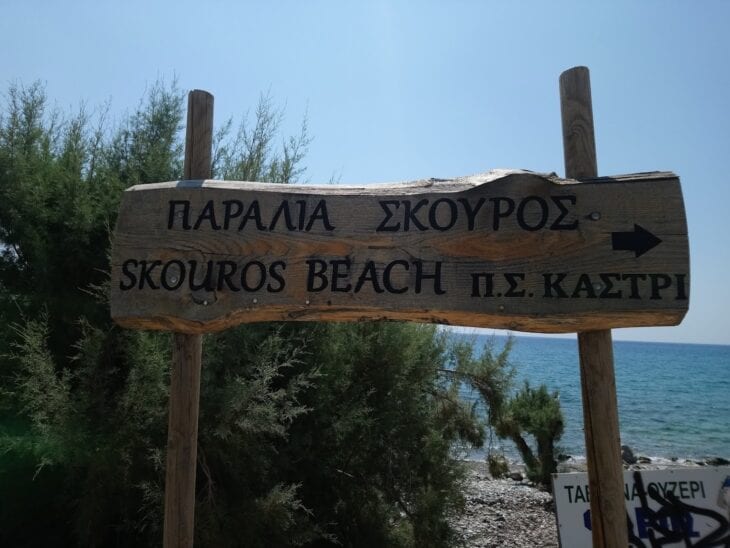 Just a bit further past Skouros beach is Kastri. The little bay of Keratokambos, where Kastri is found, provides some shelter for waters that are usually calm. The beach, which is both sandy and shady, is one of the more popular of the area. It’s in the little port town of Kastri, and is therefore very convenient, with plenty of services like cafes and tavernas directly nearby. 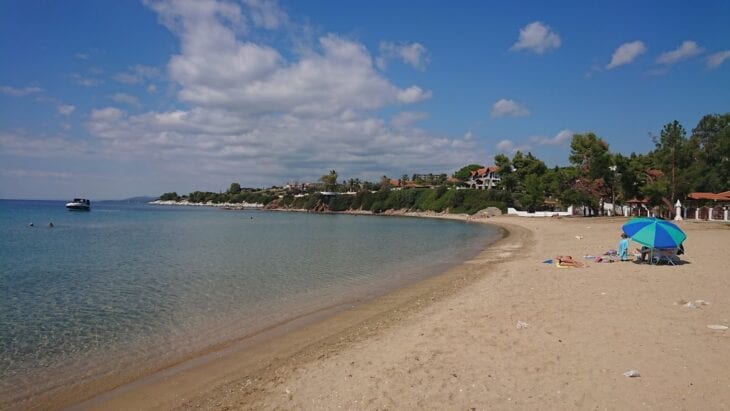 And a little further (but still less than 5 km from Listis beach), you’ll find one of the loveliest beaches of the area. Again with a lovely rock formation “Armenopetra” (“sailing rock”), this sand and pebble beach with shallow waters has no “civilization” nearby. Naturists sometimes seek it out. 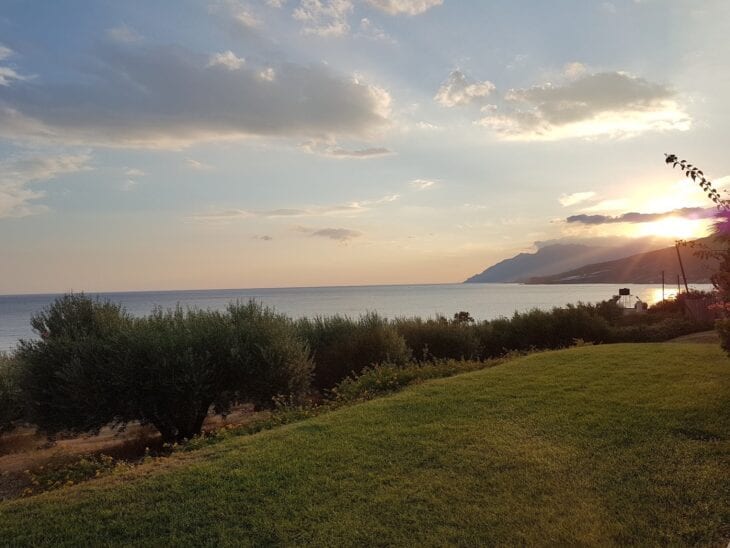 To the west (1.3 km) of Listis beach is Kamboula beach, by the river Anapodaris. It is easily accessed from the road, but still very quiet (and again sometimes sought out by naturists). The waters of this pebble beach are splendid. 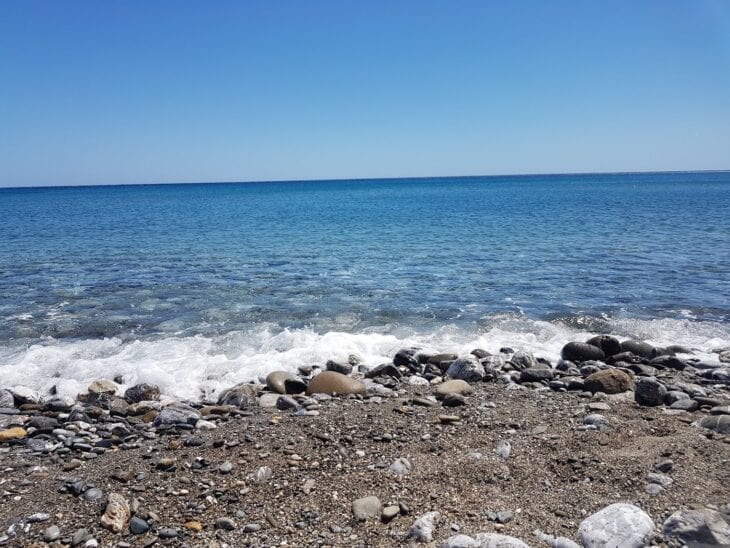 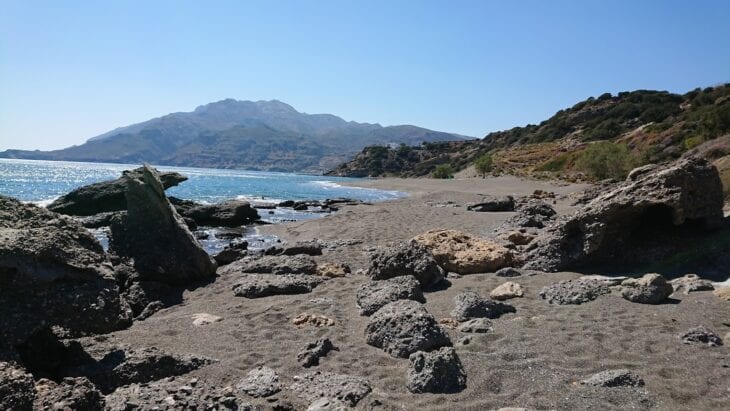 Maridaki beach is the perfect choice for those tourists who simply want to relax. One of the biggest attractions the island of Crete has for tourists is its beaches. Maridaki is at a distance of 65 km from Heraklion, the capital of Crete. The closest town, Tsoutsouras, is only 2.5 km toward the east. If you plan on visiting Maridaki beach, you can get there by bus, car, or taxi. 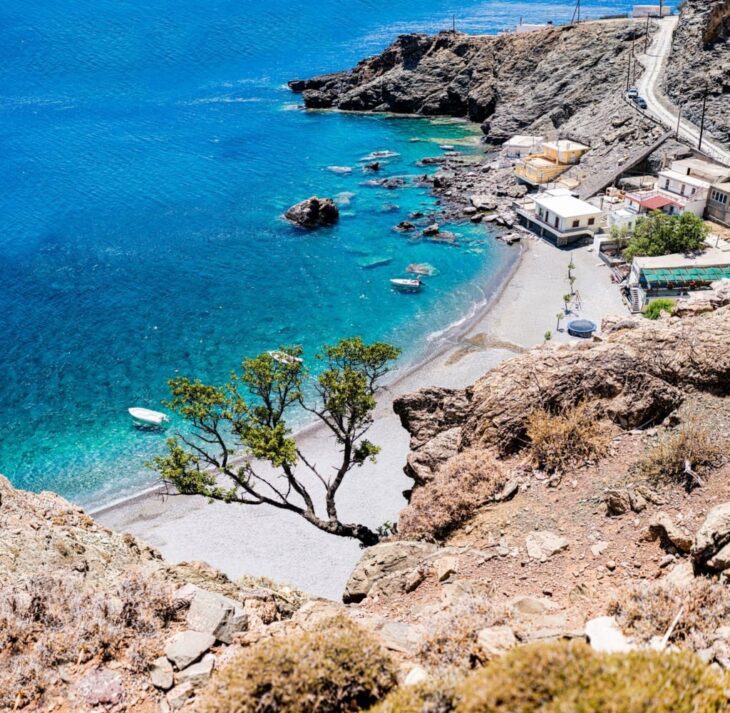 The beautiful Kaminaki Beach is found at the southern edge of the Asterousia Mountains along the southern coast of Crete. The beach is situated in a picturesque setting among the mountains, cliffs, and gorges. Since this beach is not well known, it is ideal for leisure and isolated relaxation. The surrounding wild mountains form a distinctively Cretan backdrop. The best time to visit Kaminaki Beach is in the late spring, summer, and early fall. You will fall in love with the experience of the summer months. 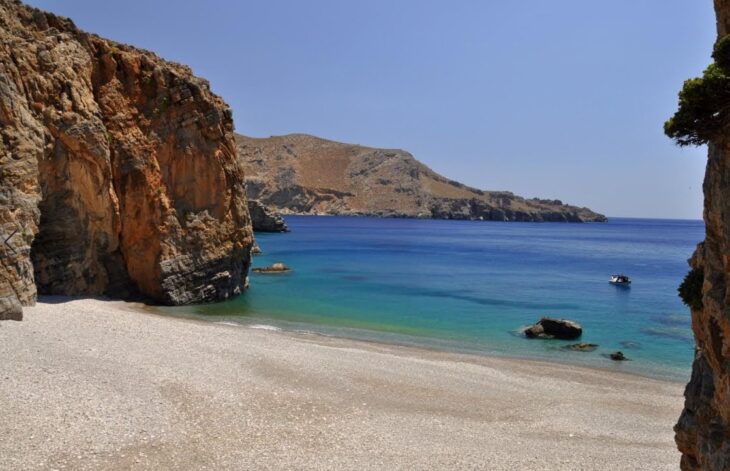 As beautiful as the beaches around Listis are, there are still more natural wonders in this part of Crete. There are several gorges to explore. The Tsoutsouras Gorge and the Troulla Gorge are right next to each other, about 5 kilometers west of Listis Beach. These dramatic gorges are popular for canyoning. The Troullos gorge – the shorter of the two – has 15 waterfalls. 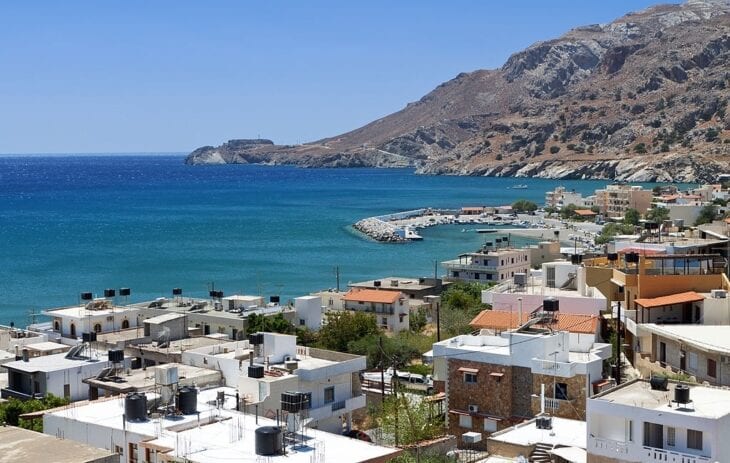 To the northeast of Listis beach is the Portella Gorge. It leads from the village of Hondros and ends in Keratokambos. The most dramatic gorge of the area, it is popular with serious and experienced canyoners, and is otherwise largely inaccessible. However, there is a lovely waterfall near the canyon’s exit – “Richtra” – and here you can access a small portion of the gorge and see its splendor with no equipment.

Other activities near Listis beach include taking in the slow pace of beach village life and enjoying the charming little harbor towns with their fishing boats. Tsoutsouras is to the west and Keratokambos to the east. These are ideal places for a meal at a fish taverna by the shore.

If you have a taste to go a bit further, you can drive to Ierapetra, the largest town on the south coast of the Lasithi prefecture, a little over an hour from here. From here, there are excursions to Chrissi Island – a magnificent and uninhabited island of silky golden sands and rare Lebanese Cypress trees.

As relaxed and remote as this peaceful corner of Crete seems, it was not always this way. This part of the island was also inhabited in antiquity and through the earlier part of the Byzantine period. Here are some cultural destinations to get a sense of the history of southern Crete.

Remember the Minoans? The Bronze Age culture of Crete with the magnificent palace at Knossos? They take their name from the mythical King Minos. While you’re at Krassas beach, imagine that this was by legend his burial place.

Cruising above Keratokambos is the hill of Kerato – also called Kastri or Vigla. Findings in the cave of Nichteridospilios (“Bat Cave”) reflect that this was a sanctuary in antiquity. Closer to our present era is the main sight on the hill – the grand Vigla Fortress. When Crete was liberated from the Arabs in 961 AD under emperor Nikephoros Phokas, this is the point the Byzantines chose to build a fortress to defend southern Crete from the many bands of pirates then roaming the seas.

Also read:  Everything You Need to Know About Lendas

Less than 5 km from Listis beach and just south of the village of Hondros is the Hondros Tower. The tower was built during the German occupation of WWII as it commands an excellent view of the region. There is also an ancient settlement here, with ruins of foundations still evident. 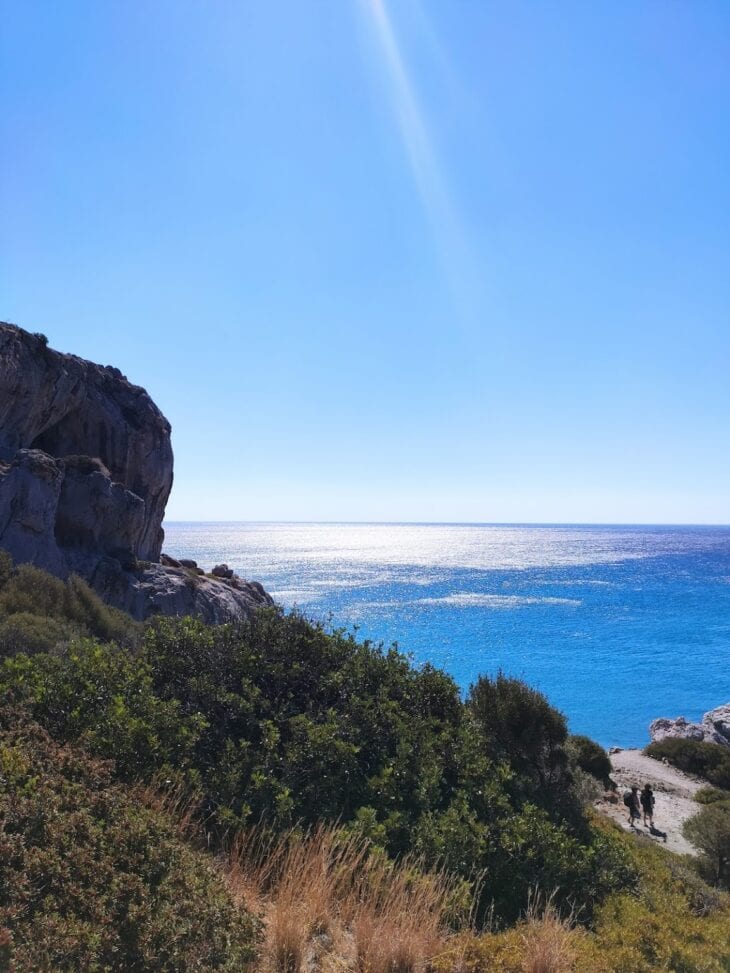