Basics and History of the Greek Language

As we know it, human history must thank language as the ultimate tool in preserving and passing knowledge on. But not every language has the ability to survive millennia.

So how did Greek come from the Indo-European language to what is spoken today? Ancient languages can usually thank certain linguistic aspects and social circumstances for their survival. Greece and its language are no different. From Indo-European to Modern Greek, the Greek language evolved through phases of transformation over the Roman period, Hellenistic period, and so on. 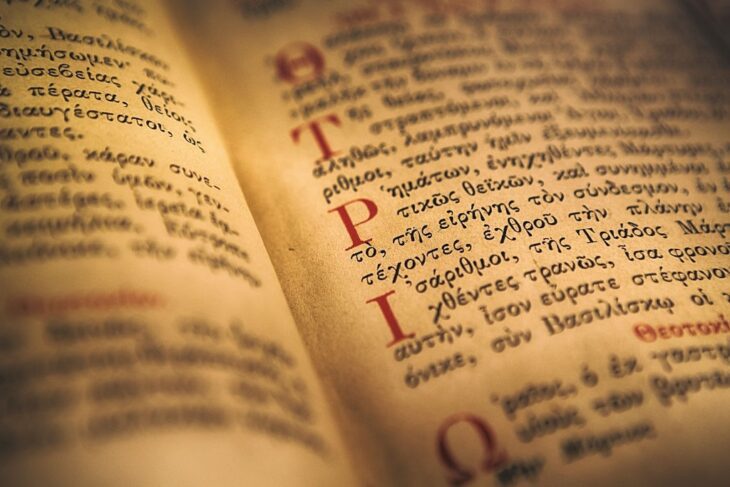 By analyzing Greek history from its roots in Proto-Indo-European to Standard Modern Greek, we will explore the stages the language passed through to survive. First, history divides the evolution of the language into four major phases: Ancient Greek, Koine Greek, Byzantine Greek, and Modern Greek. But the predecessors to the language are even before those.

So, let us start with the history of the Greek language. This way, we will find out how the ancient language and Greek letters formed.

Also read:  Everything about the Minotaur Myth in Minoan Civilisation

There are no written texts from this period of history, nor any Greek alphabet. Nevertheless, archaeological and historical findings suggest the Greek language family was in its cradle thirty-four centuries ago. Not long after this, the first Greek writings appeared. They were written in what’s known today as Linear A and Linear B scripts. 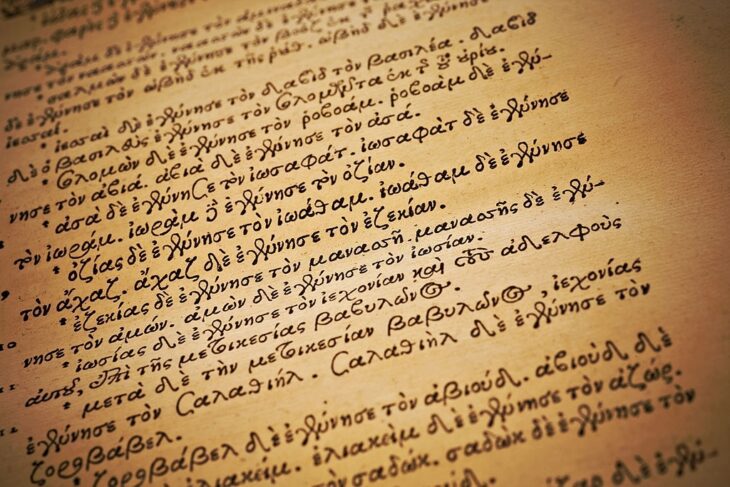 The Minoan civilization evolved on the Balkan Peninsula after the Hellenic tribes migrated. Following that, the Minoans developed the first script of written Greek – they used a writing system called Linear A. They used this script, a system close to hieroglyphs, in palaces and religious temples. Separately, this script was also used in Cyprus, and from there, developed into another separate script known as Cypriot syllabary.

The Greek people adopted both scripts. These two scripts set the path for the development of Greek and its later forms.

Also read:  Everything about the Mythical Labyrinth of the Minotaur (Minoan Maze)

The ancient Greek language is pluricentric, meaning it consists of many different dialects, all of the same language. Also, the language comes with its alphabet, an upgrade from the Linear A and Linear B mentioned above.

This alphabet derives from the Phoenician one, a Semitic alphabet consisting of 22 letters, with new unique letters implemented to fit the Greek’s own language. Interestingly enough, the Greek script was actually the predecessor to the Latin alphabet. 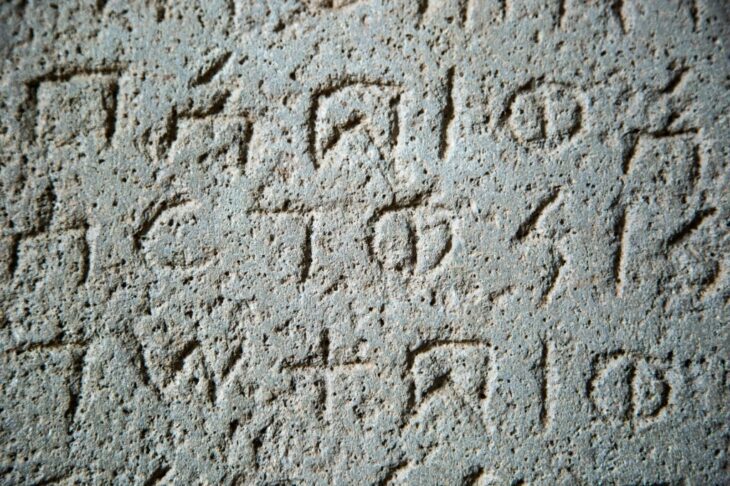 In the history of Ancient Greece, two crucial historical periods follow. These are the Archaic Period and the Classical Period.

As mentioned above, Ancient Greek consisted of many different dialects. However, common Greek people across Greek cities understood each other, whether in Classical Attic, Ionic, Athens, Doric, or Macedonian. The dialects arose from regional differences and became codified as literary dialects associated with different academic categories.

The Archaic Greek period represents a prosperous time for the ancient Greek people. This is evident in many fields and is especially notable when looking at literature and the written word. This is, after all, the period in which the great Homer wrote The Iliad and The Odyssey. He used a dialect known today as Homeric Greek, a variant of the Ionic Attic dialect.

The classical period is the golden age of classical philosophy. It is the time of the famous Socrates, Plato, and Aristotle, and many others. Here, language dialects and the written word were of great help to the rise of science. Thanks to the invention of the Greek alphabet and Greek letters, we still have access to the ideas of the great classical philosopher.

With the help of scripture, scholars made huge advances in the field of logic, discovering the fundamentals of mathematics. Lastly, citizens united in forming Greek cities and Greek city-states. In these cities, the many forms of Greek were slowly coming to unification.

How many letters are there in the Greek alphabet?

Koine Greek, also known as Biblical Greek, is the first widely acknowledged and unified dialect of Greek. Judging by its name, you can clearly see that it was the prevalent variant of Greek around the time the Bible was written.

This form of Hellenistic Greek is known as “the language of the common people,” and it is based heavily on the Attic Ionic dialects. This was when Alexander the Great started his conquest of the world. 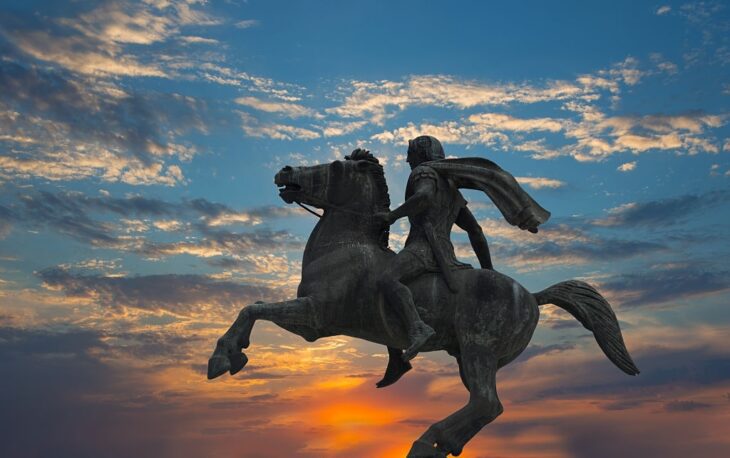 Greek spread from Europe to North Africa and Asia, rapidly exposing many people to this language. In no time, it became the first international language spoken across the globe, leaving remnants of new words in other countries’ official languages even after his conquests.

We already mentioned this dialect was also known as Biblical Greek. So, is the New Testament Greek? Many wonder about this, and indeed, it is true that scholars wrote religious texts in the Koine language. The Christian Bible, or the Christian New Testament, is a hugely influential text for the period. Thus, writing it in Greek was logical since it was the commonly understood language. After the New Testament, scholars began to work on the first translation of the Old Testament.

The common language continued to evolve throughout the rule of the Roman Empire. However, it remained the official language of the later Eastern Roman Empire.

The Greek language had a heavy influence on Christianity and remained the official language within the Byzantine Empire. Byzantine literature thrives in scientific, logical, religious, and philosophical texts. Scholars wrote all of them in Medieval Greek. 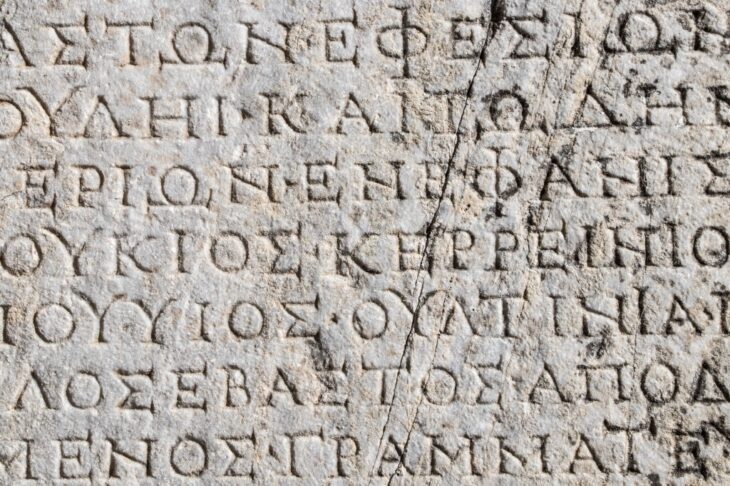 The spoken language was based on the Greek language, specifically the Koine dialect. However, in time it shifted towards what we now know as the Modern Greek language. On the other hand, the rules for the written form moved in the opposite direction, and therefore, it tended to be more conservative and closer to Ancient Greek.

Under the 400 year-long rule of the Ottoman Empire, the Greek language developed further. This development trend is towards a standardized, simplified language spoken by all Greek people.

As we mentioned, the language required a simplified version with the Greeks under Ottoman rule. This was the beginning of the path towards the modern Greek language. Nevertheless, the Greek elite tried to establish a sophisticated version of it.

This resulted in two forms of the language:

Demotic is the common Greek dialect, or the language “of the people”. It is closest to modern Greek since it is this language that the Greeks adopted as their current language.

Katharevousa is the dialect of the literary form, consisting of both Demotic Greek and Ancient Greek.

However, this resulted in extreme differences between the spoken and written Greek languages. It has contributed to Demotic modern Greek becoming the official language, the standard language since 1976. 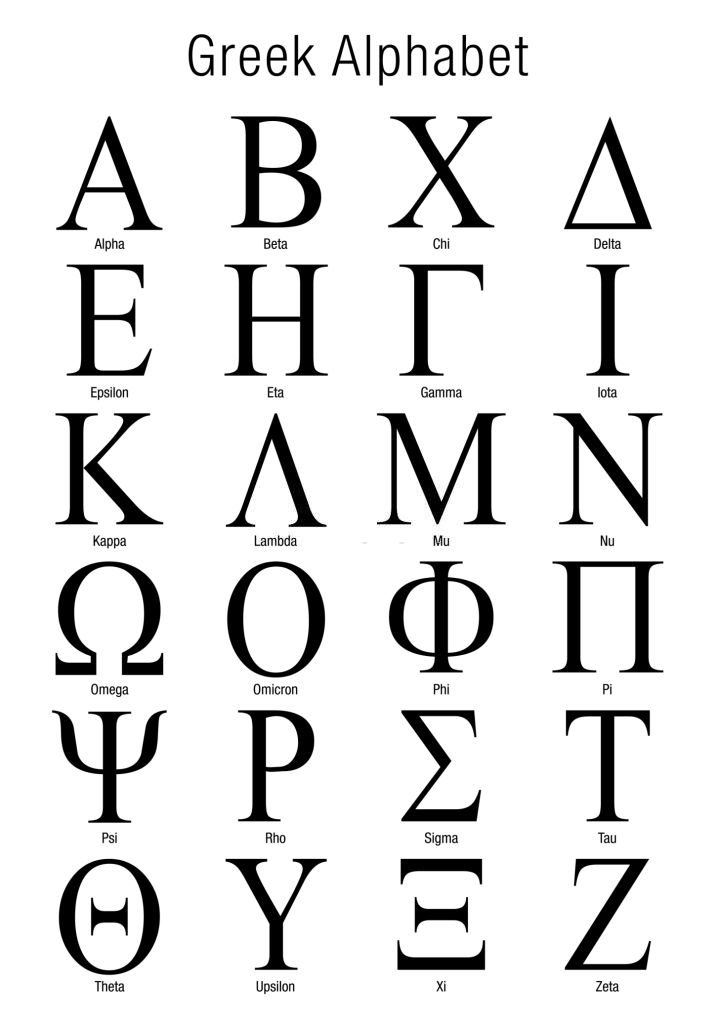 Greek history and culture are not only fascinating but also of utmost importance to western civilization. The circumstances leading to the survival of the language are unique and the subject of much scientific debate.

We hope that this article was an interesting and educational trip for you. Perhaps it will even set you on a path to find out more by doing some further reading. But, of course, this is just an overview, and you can find many other rich, interesting details about Greece and the history of the Greek people. We have no doubt it will deepen your respect for the ancient Greek culture and their civilization. It is, after all, the cradle of modern civilization.