Everything You Need to Know About Zaros, Crete

This refreshing destination is actually known to all visitors of Crete – its tasty spring water is bottled and sold all over the island. The source is absolutely lovely, and makes a novel destination and home base for your exploration of this magical island.

Everything You Need to Know About Zaros, Crete 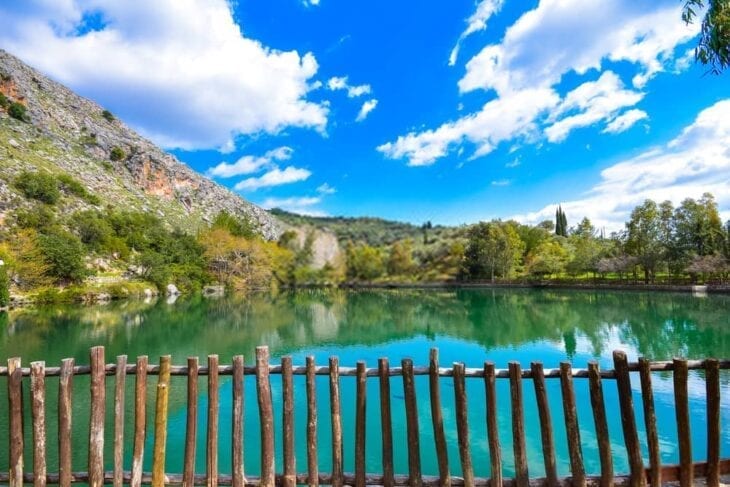 Where is Zaros, Crete, Located?

Zaros is as close to the center of the island as you can get. In the regional unit of Heraklion, it’s between the north and south coasts of the island, just east of Mt. Psiloreitis.

How to Get to Zaros

Zaros is just over 45 minutes from Heraklion’s Nikos Kazantzakis International Airport, along a mostly straight road to Agia Varvara, then up a winding road to reach an elevation of 340 meters. There is a car rental branch directly at Heraklion airport, so you can be on the road in no time at all. If you are arriving by ferry, a car can be brought right to the port to meet you when you disembark. If you would prefer to go by KTEL bus, there is one route a day. For information, please see here. It is simple to reach the Heraklion KTEL station from the airport – buses leave throughout the day from 6 am to midnight – for more information, please see here.

The History of Zaros

The wonderful water of Zaros that is so popular today is also the secret to Zaros’ long history. In fact, Zaros means a place where water flows. The Minoans – Crete’s fascinating Bronze Age civilization – settled here at Kourtes to be close to the water, and another significant Minoan palace – Phaistos – is not far from Zaros. The Romans also prized the water, and ruins of aqueducts leading to the famous city of Gortyna are found throughout the area. Zaros is also rich in Christian tradition, with several lovely and significant Monasteries.

What to See and Do in Zaros

Zaros itself is a delightful village, with narrow paths and alleys and traditional architecture. Visit the lovely church of Agia Kyriaki, and the museum next door. Because there is so much water in the region, there are also many watermills – you can see ten in lower Zaros. 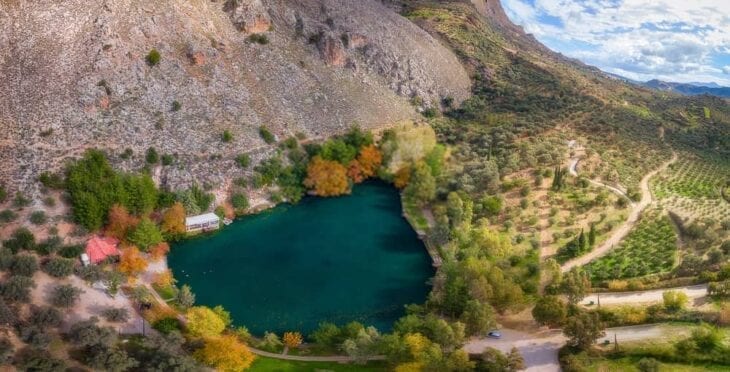 Zaros is at the very edge of the magnificent Rouvas forest, a perfect destination for nature lovers. At the heart of the forest and less than 5 minutes by car from the town of Zaros is Lake Votamos. This is the ideal place to come for a coffee, to feed the ducks, and marvel at the scenery. For lunch, you can have trout from the lake, a local delight.

Start exploring the Rouvas woods from here, through the Agios Nikolaos gorge, on a trail that begins at the lake of Votamos and leads to the Agiou Nikolaou Monastery. From here you can explore further, hiking through an oak forest for 2 – 3 kilometers to the church of Agiou Ioanni.

As lovely as the beaches of the much more populated north coast of Crete may be, everyone in the know loves the wilder beaches in the south, on the coast of the Libyan sea. From Zaros, some of the loveliest beaches of the island are within an easy distance.

Agia Galini is a lovely coastal town by the exit of the Platys river. Along beaches stretches to the east from the port, where you’ll find umbrellas and sun loungers and generally calm seas. If you are looking for something a little wilder, keep walking and cross the bridge over the river. This will bring you to another beach, with pebbles. Bring whatever you need with you, as the farther you walk there are no facilities or cantinas. Agia Galini is a little less than an hour from Zaros. 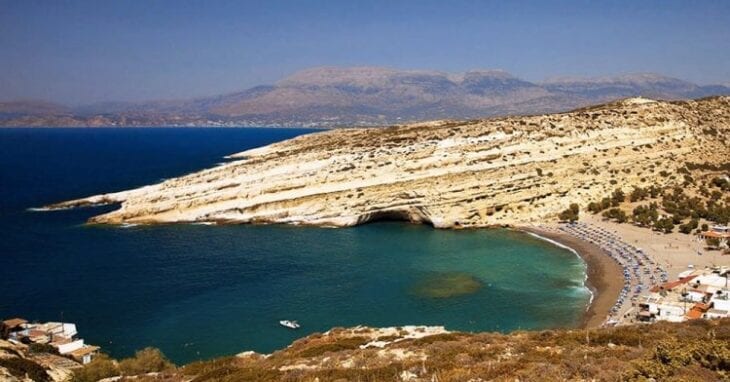 About a 40 minute drive from Zaros is Matala, made world famous by the hippies in the 1970s, is spectacular. The hippies dwelled in the caves on the dramatic cliff that shelters the beach in a small valley. There are views to the small islands of Paximadia. The water is excellent- clear and refreshing, and you can find sun loungers and umbrellas. It can be wavy, and the water is deep.

Hikers will love it here! This is a delightful destination for anyone interested in a nature holiday. Part of the E4 European Long Distance Trail runs from the Nida plateau to the church of Agios Ioannis in the Woods of Rouvas, passing the Church of Agios Spyridon, a fantastic hike. The E4 trail continues for more adventure. 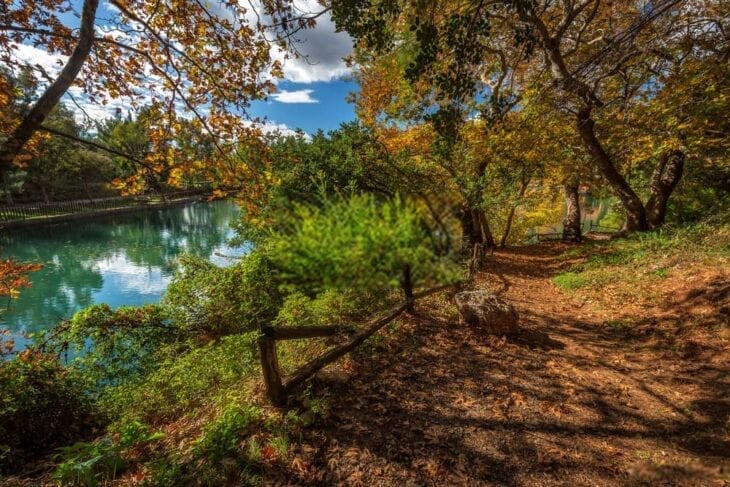 A drive of about a half an hour, in the direction of Matala, you’ll find a horse farm offering rides among the olive trees and dramatic scenery near the southern coast. Or try a diving – there are several diving centers along the south coast. 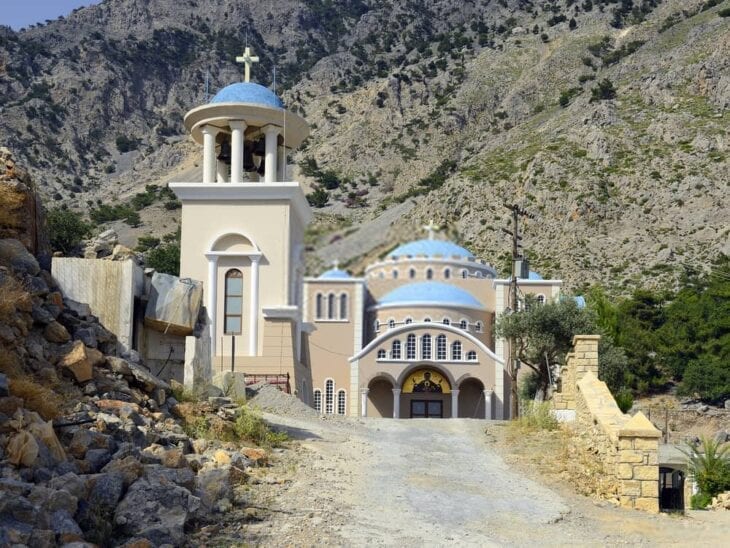 The monastery of Vrondissis, dedicated to Saint Anthony, is one of the oldest of Crete. It’s located between the villages of Zaros and Vorizia, with glorious views of the Messara plain. The church has a Venetian bell tower, and marvelous church frescoes from the 14th century display the influence of the Renaissance. Legend has that both El Greco and Michalis Damaskinos – a famous iconographer -have lived and worked here. Six works of Damaskinos, now in Heraklion – were formerly housed Vrontissi. A glorious 15th-century fountain depicting Adam and Eve has figures with water flowing from their mouths – one of the loveliest sights of the monastery.

The picturesque monastery of Vasamonero has been abandoned since the 18th century. It now belongs to the Vrodissi monastery. The Venetian frescoes attest to its former wealth and importance, and they attest to the flourishing art of Venetian Crete. You can still see Venetian style church of Agios Fanourios, with traces of Gothic details on the exterior.

One of the most fascinating religious destinations near Zaros is the mysterious and marvelous cave church of Agios Efthymios, who lived in the later part of the 17th century. 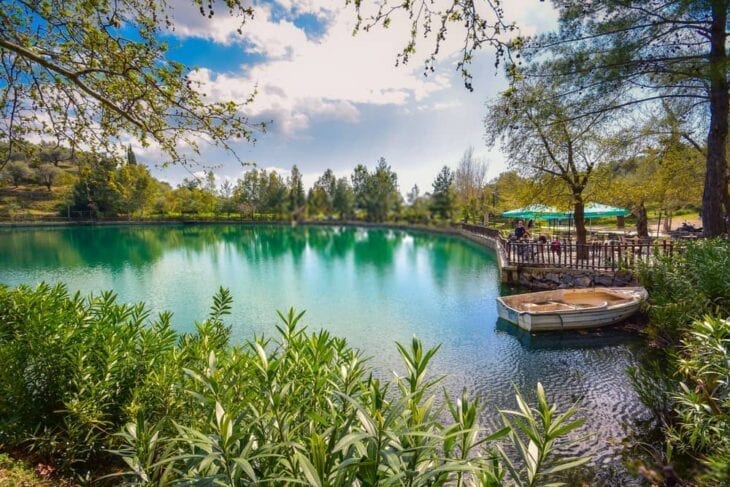 Just half an hour’s drive from Zaros is Phaistos. This is one of the most important archaeological sites on the island, the site of the second largest city of the Minoans, and a significant city state. The city continued to flourish throughout the archaic, classical, and Hellenistic eras, and was finally destroyed by the rival city Gortyn.

Gortyn, the Roman capital of Crete, is a magnificent archaeological site. The vast site includes temples – especially a temple to Apollo – baths, an honorary arch, an agora, and a praetorium, seat of the Roman governor. Here, inscriptions of the Gortyn Code were found – this is the most ancient and complete code of Ancient Greek law. Here is also the plane tree under which Zeus, disguised as a bull had his mythological tryst with Europa. Gortyn is just half an hour from Zaros.

Lastly, for anyone interested in history and culture, it would be a shame to miss Knossos, the main palace of the Minoans, excavated and restored with zeal by Sir Arthur Evans. This colorful vivid archaeological site is truly unforgettable, and is less than an hour’s drive from Zaros.

Have you been to this part of Crete?