Baptisms in Crete: The Beautiful Celebration of Christening

While baptisms in Crete take place all through the year, the warmer summer months – when visitors also favour Greece – are also very popular for baptism. Here are some Cretan customs around these festive and beautiful religious rites.

Everything you need to know about Baptisms in Crete

The Greek Orthodox baptism is a beautiful ceremony where the child, sponsored by a Godparent, becomes officially a Christian. Much festivity surrounds the event, important for the whole family.

Since the Greek Orthodox tradition involves a full baptism – dunking the child completely in the water – the child is usually not a newborn but rather a more robust baby. The baby must be at least 40 days, and is usually younger than two years old. 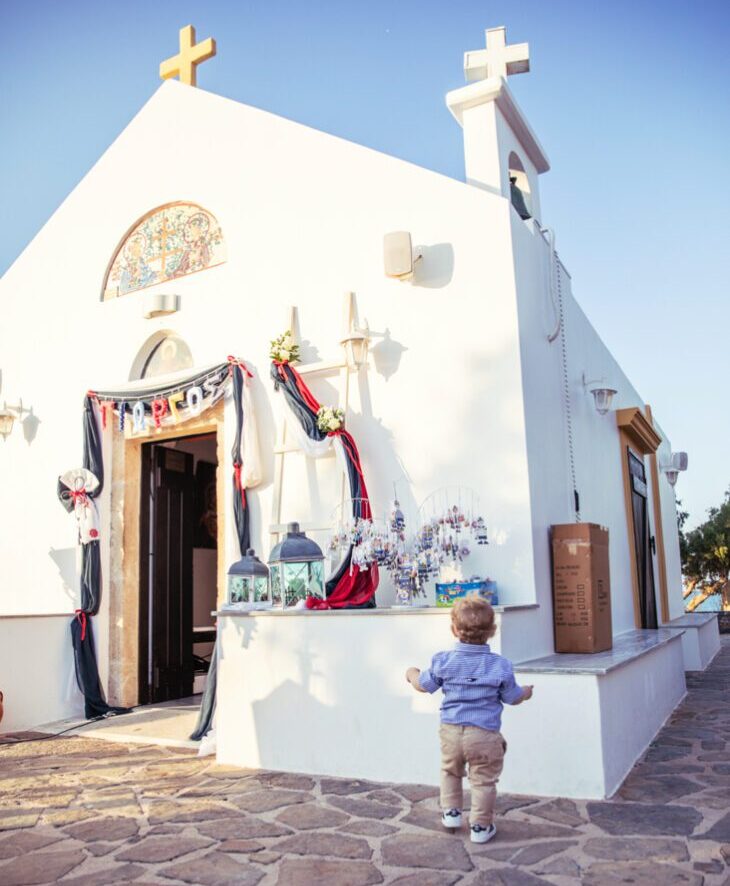 Often taking place right after the church ceremony, but otherwise in the hour of sunset to avoid the great heat of the afternoon, the baptism ceremony brings together family, friends and neighbours. The child is held by the godparent while the godparent reconfirms his or her allegiance to the church, and denounces the devil. The baptism bath is in the main part of the church. Everyone gathers around and the child is undressed, then the priest dips the child entirely into the holy water, three times, giving the child its name, and invoking the Father, the Son, and the Holy Spirit. 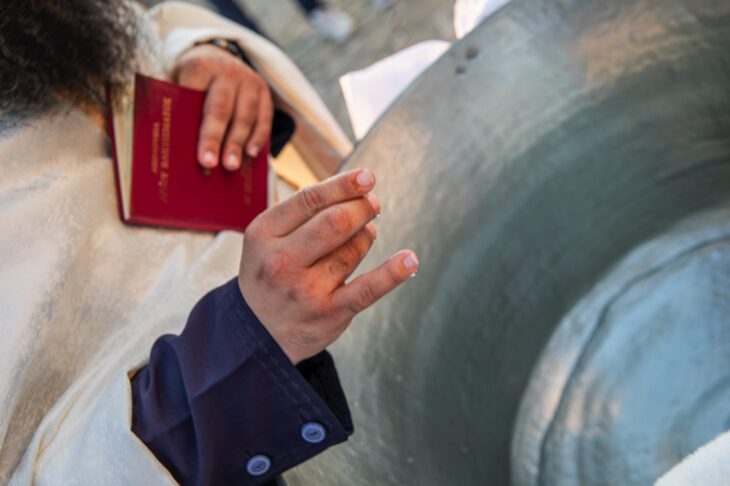 Sometimes, the child is quite angry by this point! But soon all the love and attention will soothe away any tears. The child is anointed with holy myrrh, wrapped in a towel, and carried by the Godparent and walked three times around the baptismal font.

The child is then towel dried – but not too thoroughly so that some of the holy oil stays on the skin – and then dressed, head to toe in entirely new clothing, which the priest has also blessed. After the ceremony the parents kiss the hand of the godparent. Well-wishers come and say “Na sas zisi” – “life to the child!” 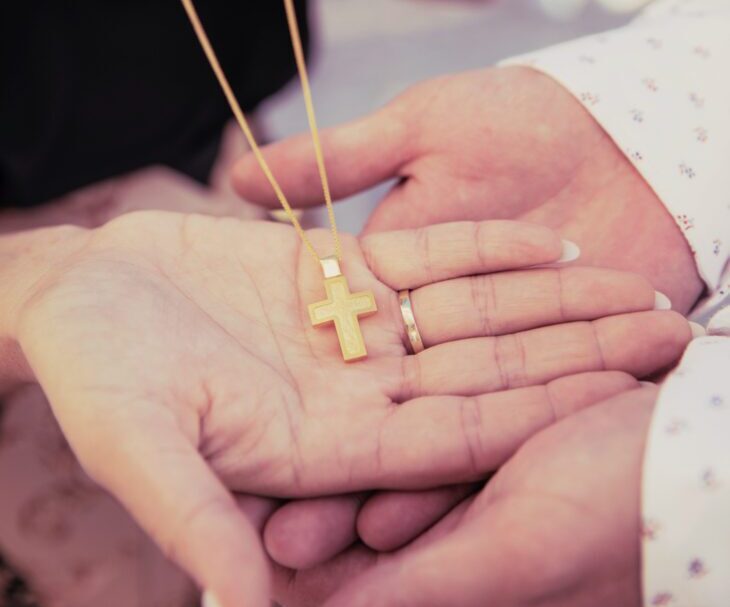 A very close friend of the mother or father is generally the Godparent, but sometimes a cousin or another relative. The relationship of the godparent to the parents is then the same as if one couple had helped the other to marry – a “koumbaros” (for men) or a “koumbara” (for women). The relationship is not just for that day, but a lasting bond. 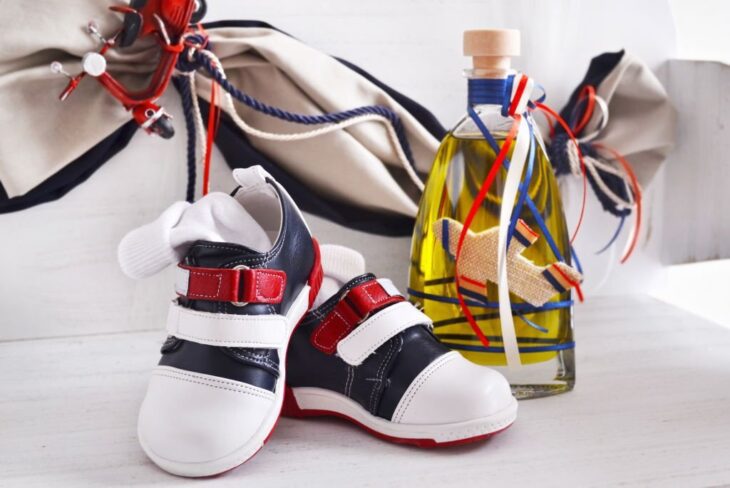 What Do the Godparents Do?

It is both a great honour and a big responsibility to baptise a child in Crete. First, there is a considerable expense. The gold cross that the child will wear is a present from the Godparent, but not only that – everything that the child wears after baptism is a gift of the godparent, as is everything needed for the ceremony: The towels, a small bottle of olive oil for the priest to put a little into the baptismal font, soap for the priest to wash his hands with after the baptism, and a special set of underwear called “ladopana” – “ladi” being oil.

All of these items are packed into a decorative chest that is then part of the baby’s room and used for years to come as a useful memento of a special day. 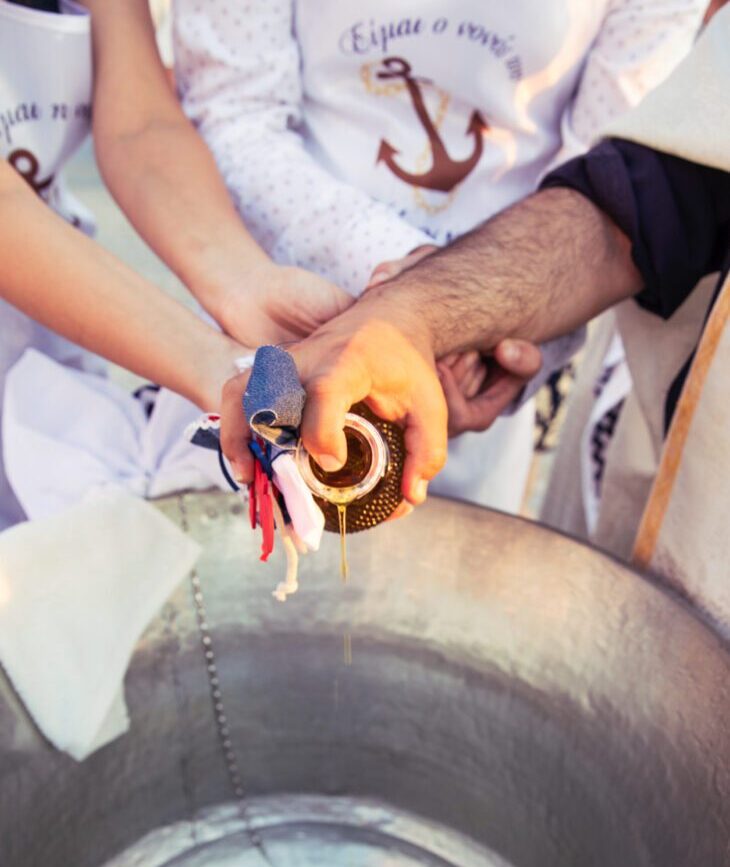 The Godparent also supplies the “Martirika ” – these are small crosses with a ribbon and a pin attached – everyone present wears one.

They also supply the decorations for the church – more festive candles wrapped in tulle like for weddings – young children usually hold these while the ceremony is going on.

One of the funniest moments in “My Big Fat Greek Wedding” is when the whole family gathers to meet the parents of the groom to be. All of the cousins seem to have the same names (“… and their children, Anita, Diane, and Nick…”). It’s funny because it’s absolutely true – that’s because it’s a strong tradition in Greece to name the child after the grandparents, usually, but not necessarily, the father’s parents first. So, many first cousins share the same name in Greece.

Even though it is a strong tradition and not a surprise at all for the grandparent to hear his or her name, it is still a very emotional moment. The name will also be the name of a Christian Orthodox saint, and that will be the name day that the child celebrates.

The Role of the Parents

The parents of the baby are the hosts of the baptism. They order the invitations, and they take care of the traditional “boubounieras”. Just like at a Greek wedding, there is a small treat of white sugared almonds, gathered in a bundle of tulle and tied with a ribbon. Along with the bomboniere is a small gift for each guest – a pretty and sometimes useful item to keep as a memento of the baptism, such as a picture frame, a small toy, or a decorative object. Additionally, there will be a small sweet. 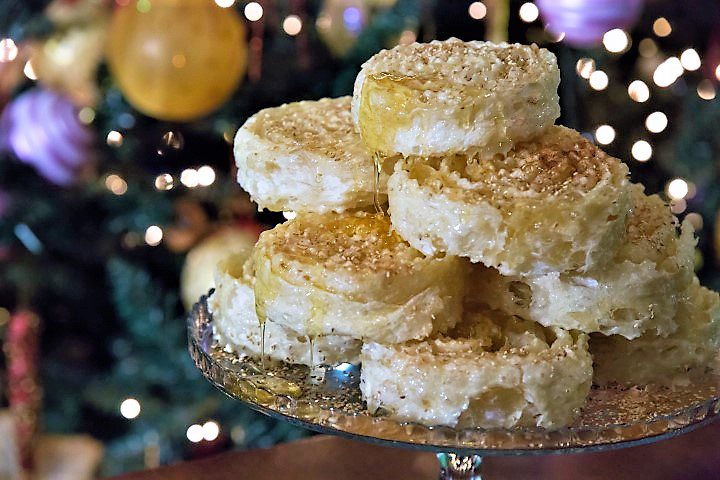 While elsewhere this could be a miniature profiterole or a classic small cake, in Crete the sweet is very often the same as the traditional wedding treat “Kserotigana” – these are rolls of crisp fried very thin dough, drenched in a honey syrup. Cretans celebrate in style and they expect a large crowd at their special events. Because this delicious sweet can be prepared in advance and be kept safely, even in the heat, it makes an ideal “kerasma” – something to offer.

They also get a substantial and meaningful gift for the Godparent.

After The Baptism- at the Church

As the guests leave the church to greet the newly-named child and congratulate the Godparent, the parents, and the families, they will accept their small gifts and snack on the sweets. Water is also provided, and this being Crete there will also probably be some raki on hand. 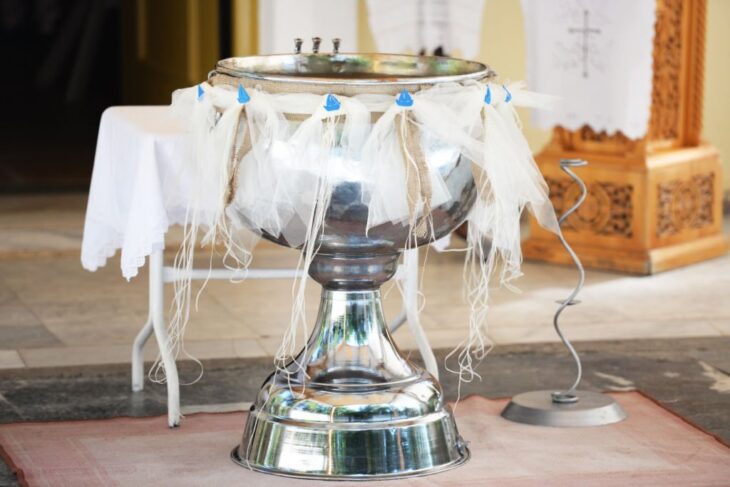 Greeks in general and Cretans in particular celebrate with food! Especially for a village baptism, although also common in the cities and towns, a baptism is followed by a festive lunch or dinner with the extended family, godparents and their family, and close friends. Cretan specialties will be served – goat, freshly made pies, excellent cheeses and salads, and homemade wines. Hopefully there will also be music and dancing to the sound of the Cretan lyra. 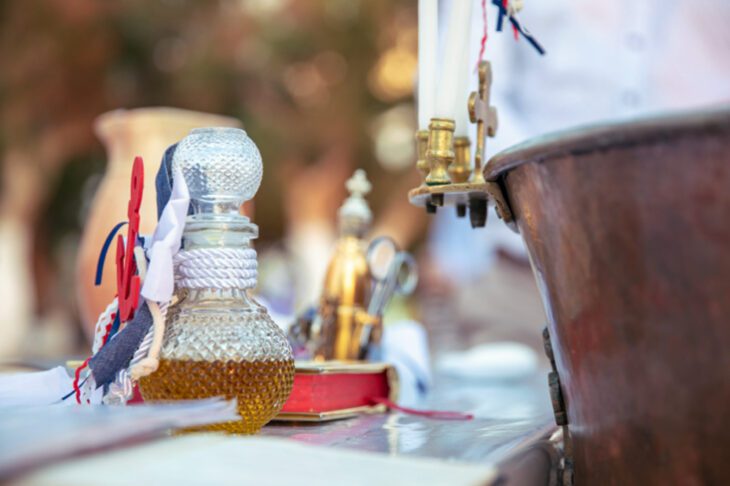 The child will not be bathed for several days – tradition says three days, so as not to disturb the holy oil on the baby’s skin. The child should also attend church and receive holy communion for the three consecutive Sundays following baptism.

The Godparents continue to play a role in the child’s life. They always ensure the child has an Easter “Lambada” – the candle to get the holy light of the resurrection at church at midnight. They also offer a gift on the child’s name day. But most importantly, they serve as a spiritually important figure in the child’s life as he or she grows. 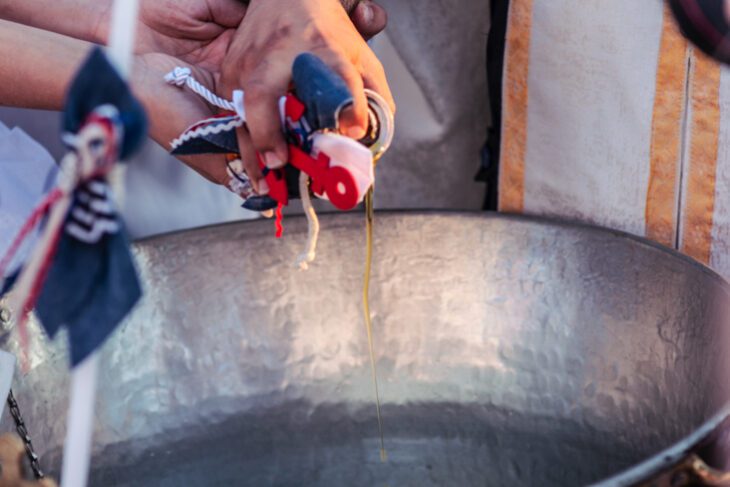 Because of the strength of the relationship and the fact that the Godparent is spiritually considered a parent, it is the custom that a person always ever only baptises girls, or boys. This is because the spiritual “siblings” should not marry, in case they meet later on.

It is very likely that you will encounter a baptism when you visit Crete, as it is such a popular season for them. Such a joyous occasion will give you a true picture of Cretan life. 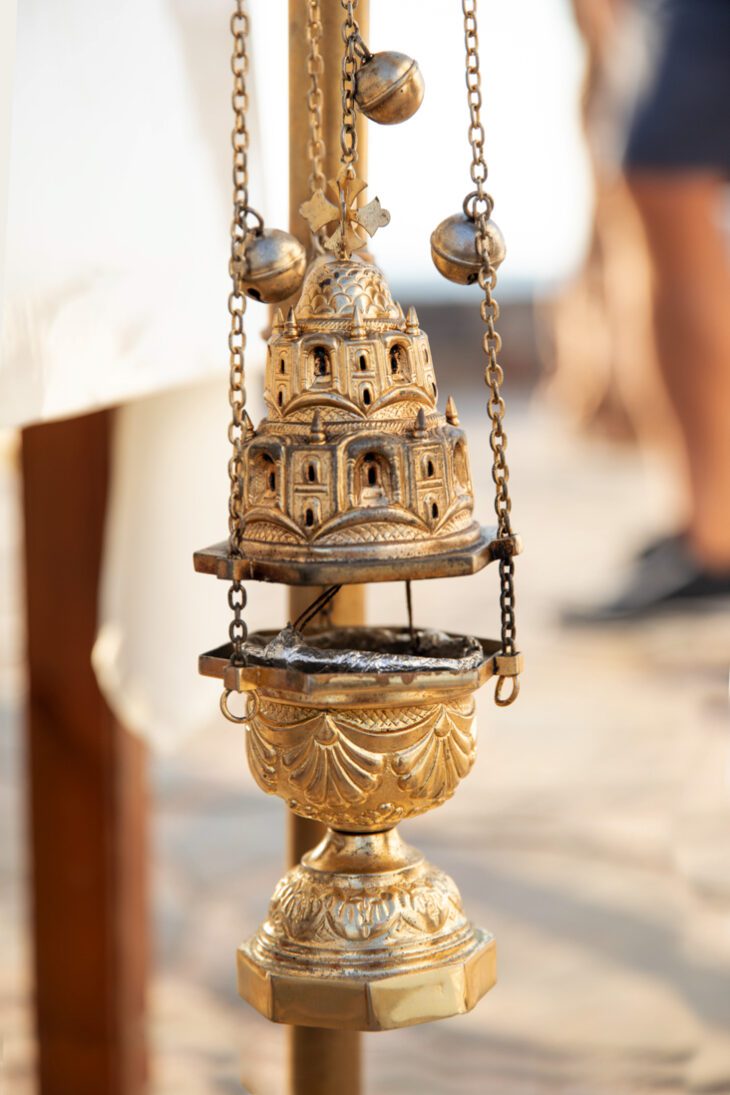