6 Unique Churches in Crete You Need to Visit

Crete, with its rich history of art and culture, is home to some of the most interesting churches in Greece. As you drive around Crete, or even as you wander the historic center of Heraklion, you’ll come across many breathtaking churches, some of which may be a little more noteworthy than others.

It can be difficult to decide which churches to visit in Crete since each is remarkably different. But, with over 800 monasteries to explore, how do you know which one to go to? Here are 6 unique churches in Crete you should definitely check out:

The Church of Panagia Kera is undoubtedly one of Crete’s most famous temples since it houses some of the island’s exquisite and best-preserved Byzantine murals. This church was built to commemorate the Assumption of the Virgin, and it has been reported that numerous miracles transpired there. 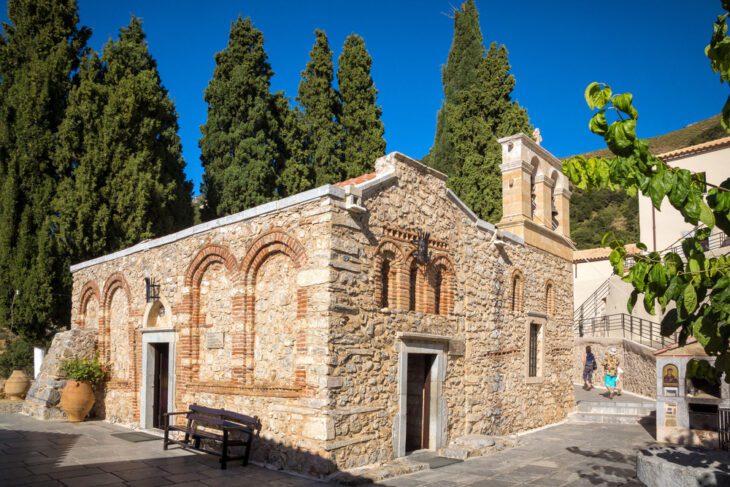 The church’s structure has a distinct form, with buttresses supporting the entire building and a small yet refined belfry. On the other hand, the inside of the church is utterly stunning as it showcases several paintings of the Virgin Mary and Jesus in vivid detail.

Panagia Kera is located approximately one kilometre from Kritsa, a beautiful mountain town in the Lasithi region, about 20 minutes away from Agios Nikolaos. You can easily reach the said church by rental car, taxi, or public transport.

Agios Pavlos is another Byzantine church that dates back to the 10th century and has been well-preserved by the people of Crete. You can find the church In the southern village of Agia Roumeli (Chania), where it is set on the very beach of Agios Pavlos. 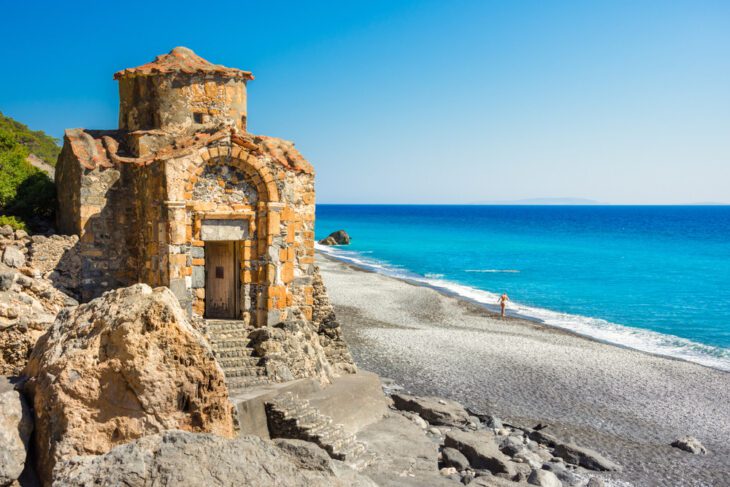 To reach the church, you need to walk the path along the sea from the village’s main beach. This will take about 20 minutes, depending on your speed, but it is worth the trek since you’ll get to take in the gorgeous view of the Cretan Sea.

This church’s name actually means Saint Paul since it was built in his honour – this particular structure is said to stand on the same site where he baptised Christians during his journey to Rome.

Dark stones from the very beach of Agios Pavlos were used to build this mesmerising monastery. It stands a few metres above the sea, and it is adorned with a white cross on its dome.

Agios Pavlos is still worth visiting even if you’re not particularly religious, as you will be mesmerised by its intricate 13th-century frescoes and stone facade.

Also read:  The Most Stunning Monasteries in Crete

During the Ottoman era, the majestic church of Agios Nikolaos in the Turkish area of Splantzia served as the city of Chania’s major mosque. Today, it is one of the most significant sights in the historical part of Chania. 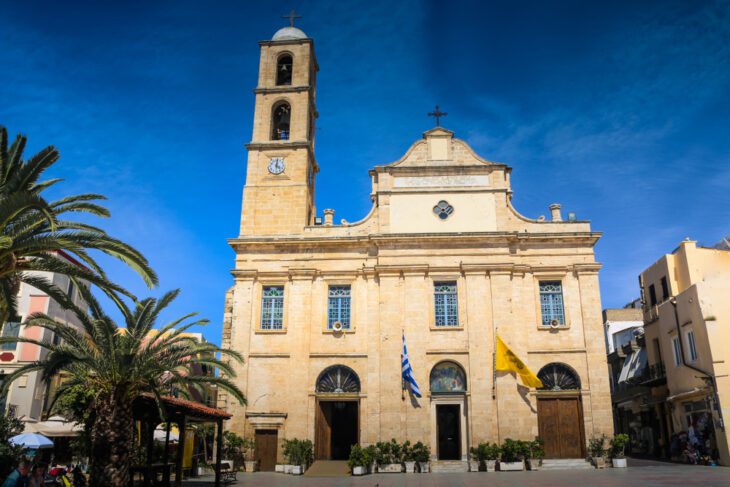 The church was built in 1320 and was part of the Dominican convent of Saint Nicholas. This church’s most distinguishing aspect is the towering minaret (the highest structure in the historic district) that can still be seen on its south corner, while a Venetian bell tower rises up on its north side.

If you visit the church, you will be able to admire the remnants of the convent and its former mediaeval portal.

Church of the Panagia (Fodele)

The Church of the Panagia, located in the small village of Fodele, just a few kilometres from Crete’s capital, Heraklion, is one of the island’s most valuable Byzantine structures. 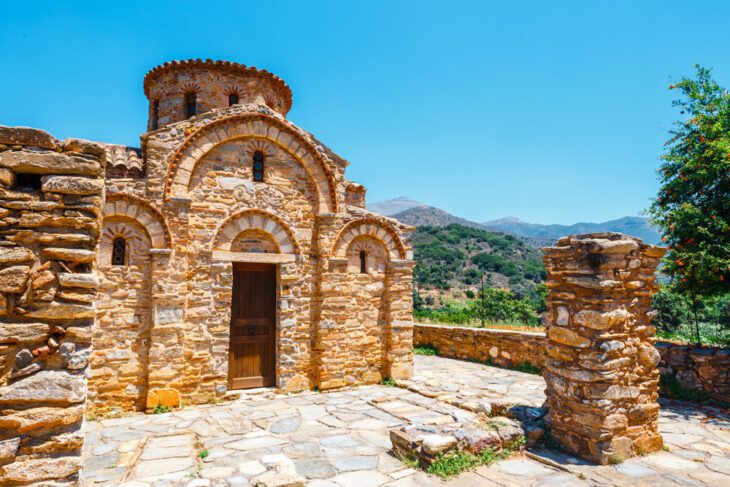 It was constructed on the center aisle of a three-aisled Early Christian basilica from the sixth century. A portion of the exterior foundations, two pillars, and a baptistery can still be found in the church today.

Inside the monastery, you will see stunning antique paintings, some even dating back to the 12th century. There are also depictions of Jesus, Mary, John the Baptist, angels, apostles, and other Biblical figures.

The temple is nestled amongst a grove of orange trees directly across from the El Greco Museum.

Church of the Panagia (Thronos)

The Panagia Chapel, also known as, The Church of Our Lady, is located in the beautiful town of Thronos, right in the center of the Amari Valley, in the Rethymnon region. 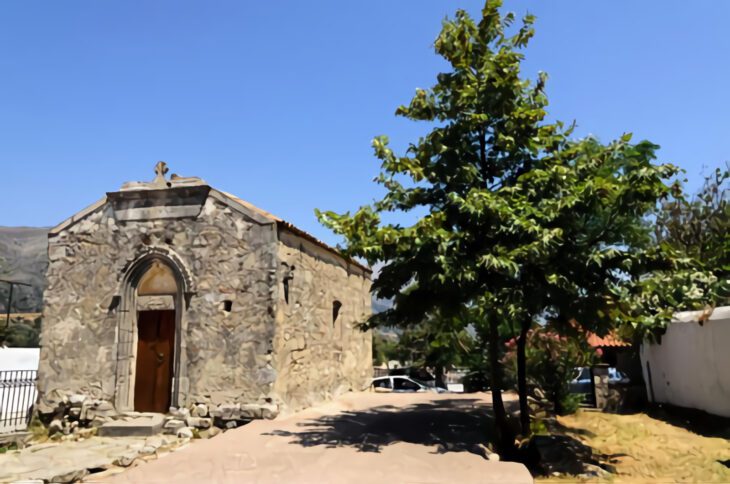 It’s an ancient structure with a vaulted ceiling and a single aisle that houses a splendid collection of murals. Although the church may have a simple interior, the walls are adorned with rare Byzantine paintings and a 1491 inscription.

The temple is built over the ruins of a 4th-century early Christian basilica, parts of which may still be seen.

If you plan to visit the church, be sure to head to the local cafe first and ask for the key to get inside.

Nothing can compare to the breathtaking view of this ancient monastery that you’ll be able to see in the region of Chania. This tiny chapel was constructed at the tip of a long pier that stretches into the sea precisely at the end of Georgioupoli’s city beach, a small seaside village that is around 27 kilometres from the center of Chania. 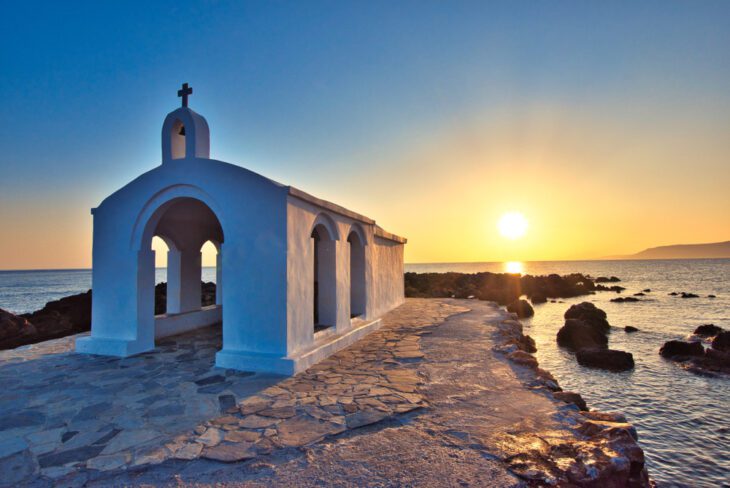 Due to its location, the church looks like it’s rising from the Aegean Sea, making it an astonishing sight you certainly won’t forget any time soon.

The gorgeous white chapel is a popular wedding venue in Crete, with many couples choosing it not just for Greek Orthodox rites but also for photographs and moments of pure euphoria.

The church is quite simple on the inside, with only a few symbols, pictures and always lit candles. Saint Nicholas, the patron saint of fishermen and sailors, is honoured at this chapel.