Everything You Need to Know About Gavdos Island

The southernmost point of Europe, the small island of Gavdos is part of the Chania region of Crete. This fascinating destination is extremely enticing due to its nice warm weather year-round, idyllic beaches and tranquil atmosphere. Only a handful of people permanently live on the island and there are few tourist services available. This only increases its mystery and charm for those that are looking for a natural escape far from the tourist crowds. Old ruins and small churches decorate the island of Gavdos, while it is also a wildlife heaven with many species being found there.

Where is Gavdos Located?

The island of Gavdos is located off the southwestern coast of Crete, almost 50 km from the town of Chora Sfakion. It is a small island of only 32 square kilometers and has few inhabitants. The capital of the island is the village of Kastri, while the port is called Karave, with few other settlements on the island. During the summer, the population of Gavdos rises from a couple hundreds to a few thousands, with mainly campers arriving to enjoy the authentic atmosphere of the island. The best way to visit is to rent a car and drive to Chora Sfakion. Park it there and continue the journey by boat. 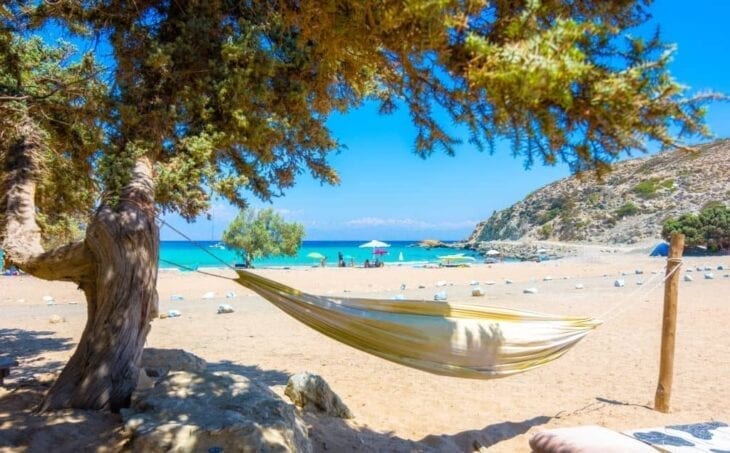 How to Get to Gavdos

You can get to Gavdos with a car rental in Heraklion or book and pick up your car rental in Chania. There are regular ferries from the town of Chora Sfakion to the small port of Karave in Gavdos. Have in mind that most car rental companies do not allow their cars leave Crete island without written permission. If you still wish to take your car on the island you need to know that there are only a few services on the island and most destinations can also be reached by walking or hiking. Nevertheless, there are several remote beaches and other attractions where the car can be useful. The ferry trip to Gavdos can take up to 4 hours and you should also bring enough resources for their intended holiday, as there are very few services and shops available on the island. 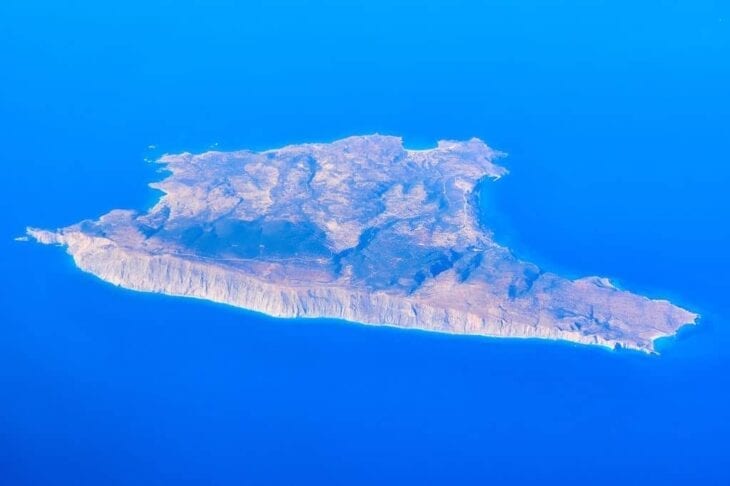 Also known as the Island of Calypso and even mentioned in the bible as Clauda, the small island of Gavdos has been permanently inhabited for about 3 millennia, with Roman and Byzantine traces discovered on the island. In the past, the island was also used as an exile destination, while its population hugely decreased over the last centuries. There are many abandoned agricultural terraces all over the island, the few hundred people that still remain on Gavdos being fishermen or working in tourism.

What to See and Do in Gavdos

The main reason you should choose Gavdos as a destination is due to its natural and unspoiled charm, the remoteness and relative decentness being part of the atmosphere. It is good to know that there are very few services for tourists on the island and most people arriving have almost everything they need for the duration of the holiday. Just a few accommodation options and taverns spread around Gavdos. If you decide to camp on the island you should do it close to one of the amazing beaches. Another thing to consider is the ferry traffic may shut down because of bad weather, so you should plan accordingly and allow for a few extra days on Crete before leaving home. During the winter months, there is usually only a weekly ferry. 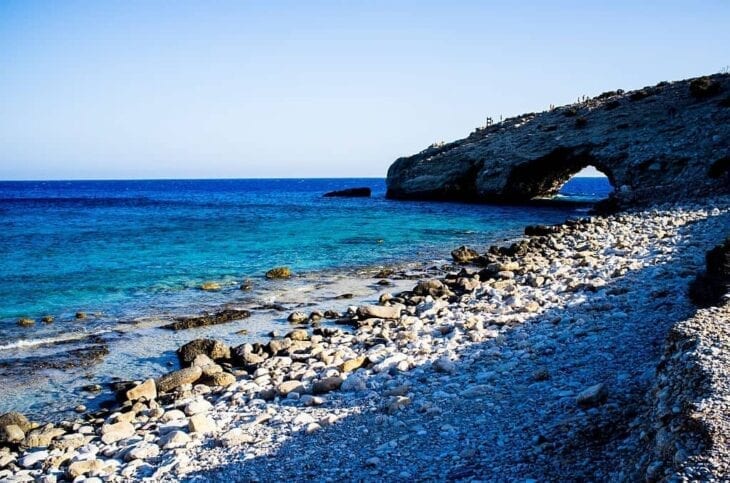 There are several amazing beaches on Gavdos and although most of them are unorganized, they are particularly attractive for people searching for an authentic natural setting. Nevertheless, the beaches are truly idyllic and usually not so crowded. Some of the most remote beaches are pretty difficult to reach, but the rewards are worth the effort.

Probably the most beautiful and famous beach of Gavdos is called Sarakiniko, named after the pirates that used to find refuge there. Located on the northern coast of the island, it can be reached with a local bus or by walking about half an hour from the port. The beach is sandy and has shallow clear waters, making it the perfect destination.

Another amazing beach is Agios Ioannis, located about 4 km to the west and reachable via the same bus. Considered one of the most beautiful beaches in the world, it is rather wild looking, with perfect sand and crystal clear waters. The rock formations and unusual landscape surrounding Tripiti Beach are truly amazing. This beach is located at the southern tip of Gavdos and it is famous for the rock arches and the giant chair that marks the southernmost point of Europe.

On the western coast of the island, the beaches of Potamos and Pyrgos are also enchanting and quite remote, with fine sand and turquoise waters, lacking any kind of organization. Other fascinating beaches of Gavdos include Diana Beach, Korfos Beach, Lavrakas Beach and Fetifes Beach. 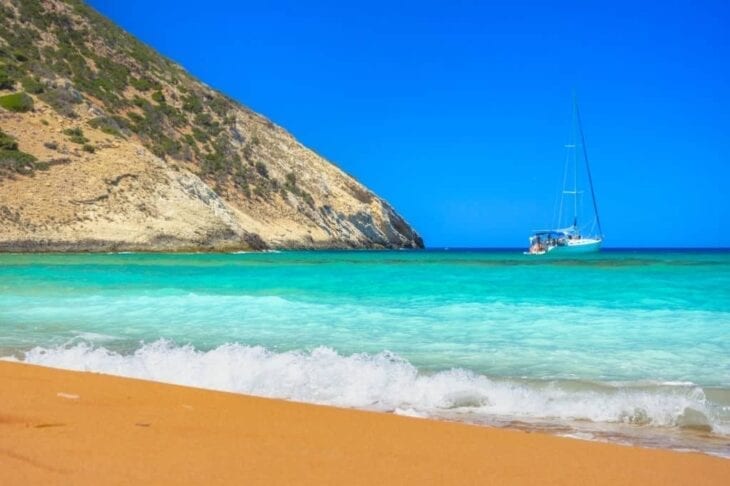 Other Attractions on Gavdos

The true charm of Gavdos comes from its pristine natural environment, the stunning landscapes that can be found on this remote island. Apart from the enchanting beaches that you can visit all around the coast, Gavdos also offers many other things to see and experience. Besides the ancient tombs and other ruins from the Minoan age have been found on the island, probably the best known landmark is the old abandoned lighthouse. 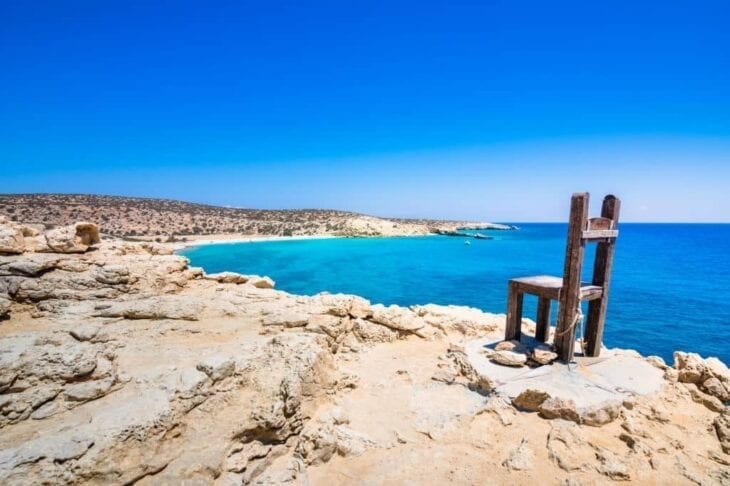 It used to be one of the most visible in the world, before it was destroyed by a German bombardment. A new lighthouse was built a short distance away, on the southwest coast of the island. That is also where a unique, three consecutive rock arches formation can be admired, especially fascinating during sunset. The giant Chair of Gavdos is also located in the vicinity, marking the southernmost point of Europe. Another interesting attraction is the small Folklore Museum of Gavdos, located in the village of Vatsiana. Other amazing places to visit include the Venetian fortress at Kefali, the old ruins of Agiannis, the exiles houses in Sarakiniko and the small churches that dot the island.

You can discover its pristine and spectacular landscapes and wildlife across many hiking paths, which is probably the best way to explore Gavdos. The paths usually follow the coastline, but some of them also pass through the small traditional villages of Gavdos, allowing for inspiring experiences along the way.

The unique vegetation and landscapes provide the perfect background for pleasant hiking opportunities. Another fascinating activity on Gavdos is bird-watching, as the island provides shelter for a great number of bird species migrating between Europe and Africa. Fishing, diving and snorkeling are also extremely popular around Gavdos, with amazing spots to discover the astonishing marine life. 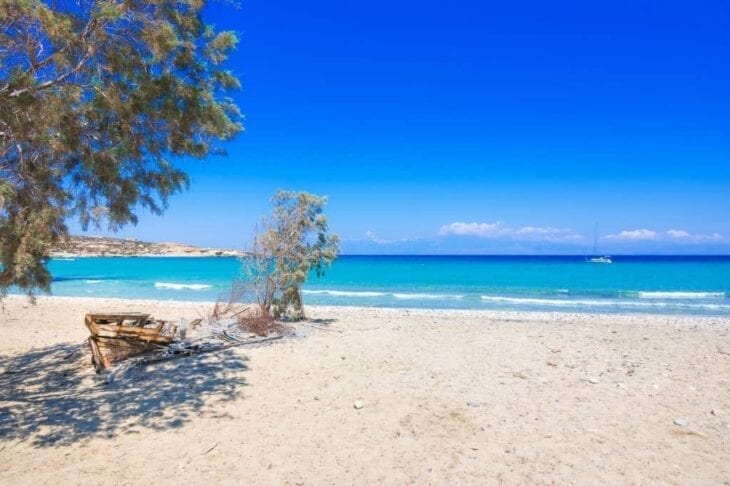 Where to Stay in Gavdos

Being one of the most remote places of Crete and relatively hard to reach, Gavdos Island does not offer much in regards to tourist accommodation. There are a few studios and private rooms that can be rented on the island, but these are usually in high demand and you should try to book in advance. If you visit during the summer you can camp close to the wild beaches around the coast.

One of the largest and most popular accommodations on Gavdos, it is located on the Sarakiniko Beach, offering quality services and beautiful stone houses perfectly equipped with private terraces, kitchenettes and other facilities.

Located in Sgoudiana, this small guesthouse has the advantage of also including a tavern where guests can enjoy the traditional Cretan cuisine. The rooms offer private terraces and bathrooms, as well as free wireless internet.
☏ +30 2823 042309

Located in a beautiful garden about 10-15 minutes from the beach of Kato Zakros, these traditional studios offer the most inspiring atmosphere and all the needed amenities.
☏ +30 2823 041181 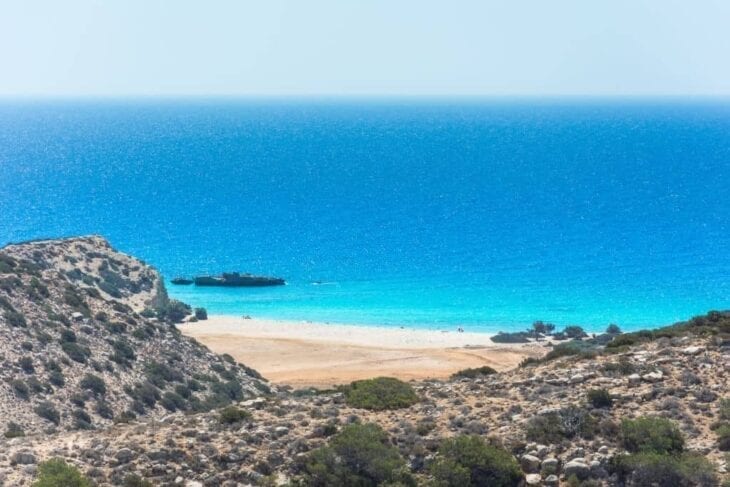 Where to Eat in Gavdos

Offering a stunning panorama over the sea and the splendid Korfos Beach below, this highly praised tavern offers the best fish and seafood menu on the island.
☏ +30 2823 042166

Located in Sgoudiana, this tiny tavern run by two lovely girls offers the most delicious traditional Greek and Mediterranean dishes; extremely loved by their guests.
☏ +30 2823 042309

One of the most beloved establishments of the island, the small bakery offers the best sweets and ice cream on the island, as well as tasty bread and sandwiches. It is located in the village of Kastri.
☏ +30 2823 041411

The island of Gavdos is the southernmost place of Europe, actually closer to Africa than of Athens. The weather is quite warm and nice for most of the year. Nevertheless, the best time to visit Gavdos is from April to October, with the winter months being a little colder and wetter, with rougher seas.