Everything about the Mythical Labyrinth of the Minotaur (Minoan Maze)

Few mysteries and myths of the Ancient World have captured our collective imagination like that of the Minotaur and his labyrinth. The Mythical Labyrinth of the Minotaur and its story are ultimately nothing less than the source of the name of the Aegean itself.

Where is the Minotaur’s Labyrinth located?

The labyrinth of the Minotaur was said to be located deep within the great Palace of Knossos, the main palace of the Minoans, Crete’s glorious Bronze-Age civilization.

What is the Origin of the Word Labyrinth?

Amateur etymologists will be pleased to imagine that the Labyrinth of the Minotaur is not a labyrinth, but rather the labyrinth – the origin of the very word itself.

Throughout the excavations of the Palace of Knossos were found images of the double-headed axe – the “labrys”. The word labrys is inscribed in Linear B on tablets. Under this interpretation – forwarded by Sir Arthur Evans, the archaeologist who excavated Knossos among others – the word Labyrinth would indicate “The Palace of the Double-headed axe”. 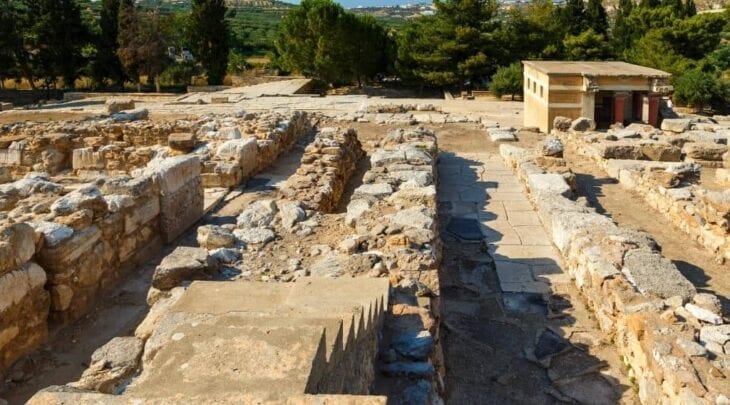 This is one of several theories of the origin of the word. Another credits the word “lavra” which meant “narrow street”. In the classical world, the Labyrinth was understood to be a complex, underground maze.

Sir Arthur Evans upon excavating the palace, found it so complex that he put forth the notion that the original labyrinth was the palace itself.

Lovers of Greek Art are familiar with the image of the labyrinth, for the Greek Key pattern found running in a repeated meander is a simplified reference to it. More complex images of a seven-course labyrinth can be found on coins.

Why Was the Minotaur Put in the Labyrinth?

As we read before, the Minotaur was a fearsome beast. Half man and half bull, he was soon not fit for human company, as we will see below. 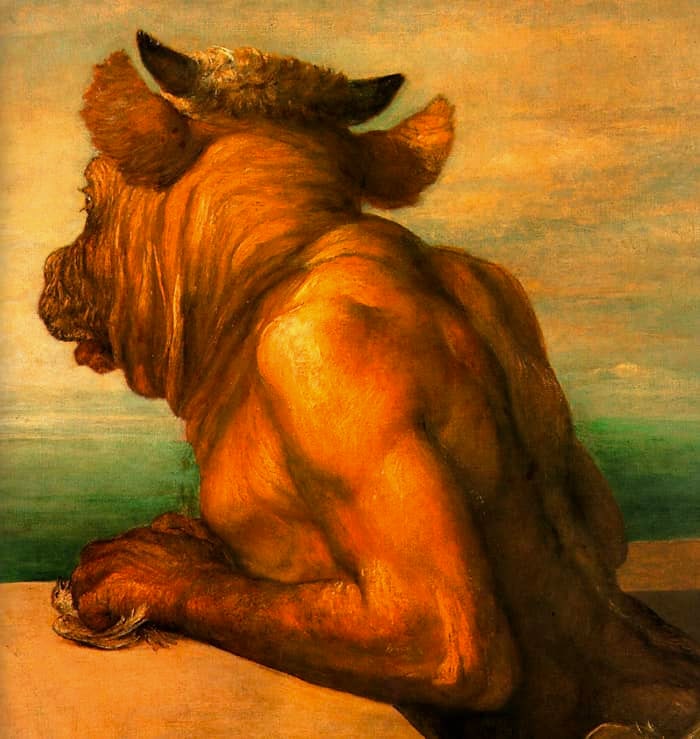 Hidden deep within his maze, he was not a danger to the other inhabitants of the palace.

The History of the Labyrinth

When the Minotaur was first born, his mother Pasiphae was able to nourish him. However, as he grew, he became insatiable. As he was an unnatural creature, a hybrid of man and beast, he had no natural diet and took to eating humans. King Minos – from whose name the word “Minotaur” derives (“Bull of Minos”) – the husband of Pasiphae – consulted an oracle (some say at Delphi) in order to determine what to do with the beast. The oracle advised a maze. Daedalus – that same master craftsman and engineer who designed the contraption with which the beast was conceived, and who would later create wings for himself and his son Icarus (the best known of his projects) – created an elaborate maze to safely house the Minotaur. 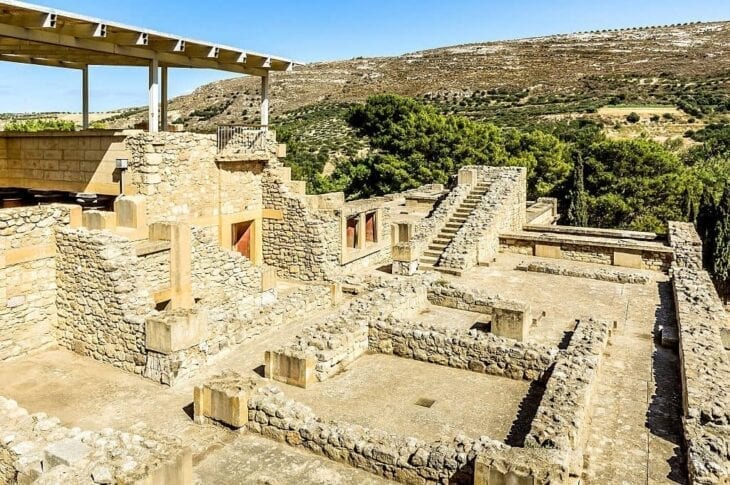 Androgeous, whose name derives from the words for man (“andros”) and earth (“geos”) was the son of King Minos. He was a skilled athlete, and this was to be his downfall. He competed victoriously in the Panathenaic games, and was killed as a result. There are varying accounts as to the details, including that he was ambushed by his would-be competitors en route to Thebes, where he would have competed again. Another version was that he was killed in a confrontation with the Marathonian Bull in a contest arranged by Aegeus, King of Athens. Other accounts have him being murdered by the Athenians and the Megarians. In all events, King Minos held the Athenians responsible, and the cost to Athens on account of his son’s death was a high one. 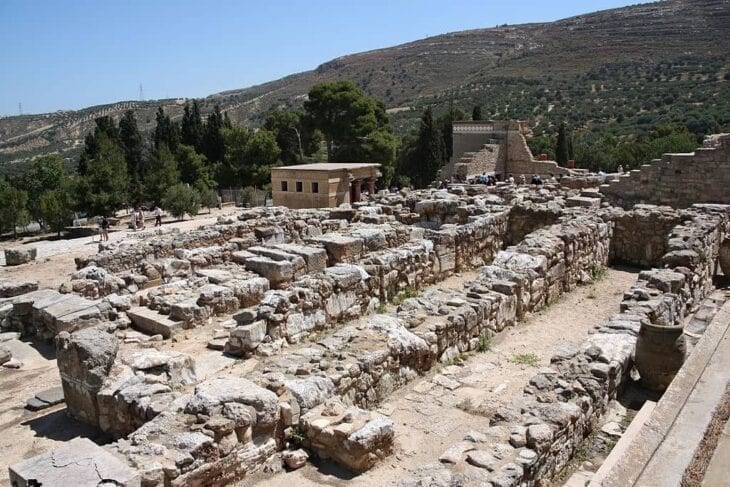 Athens had to send seven young men and seven maidens every seven or nine years (and by some accounts yearly). These young people were sent unarmed into the Labyrinth, to be consumed by the Minotaur, or perish lost in the depths of the maze.

Theseus was the son of Aegeus, a primordial King of Athens, and Aethra, daughter of Pittheus, the King of Troezen, in the northeast of the Peloponnese. Theseus was conceived after a prophecy of the Oracle of Delphi, from whom the still childless Aegeus sought advice on producing an heir. 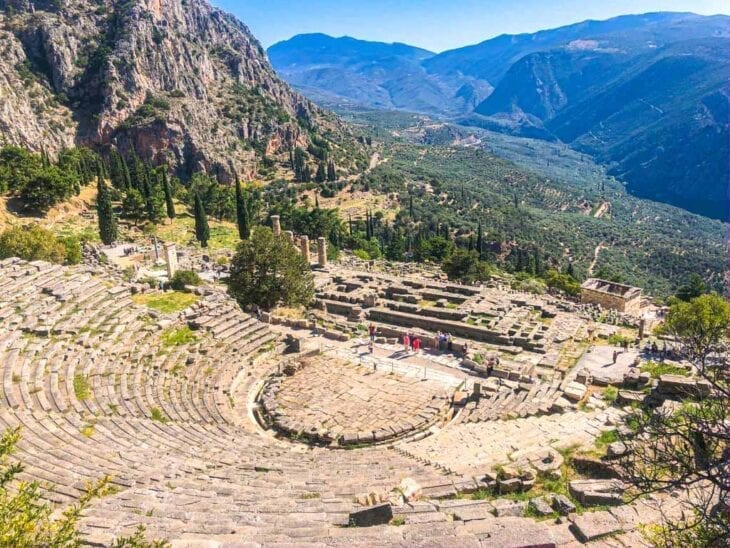 After being with Aegeus though, Aethra – as instructed by the goddess Athena in a dream – left him sleeping, and waded to an island. Here, she was possessed by Poseidon, in the night. This gave Theseus two fathers – one mortal, and one divine. And it imbued him with great strengths.

Aethra returned to Troezen, and Aegeus made ready to return to Athens. Before he did, he buried his sandals and his sword under a rock, and told Aethra that when the boy was strong enough, he would move the rock and claim these proofs of his royal parentage. Then he could set forth for Athens. Along his journey, like other great heroes, he met with many challenges, vanquishing some of the great beasts of mythology. 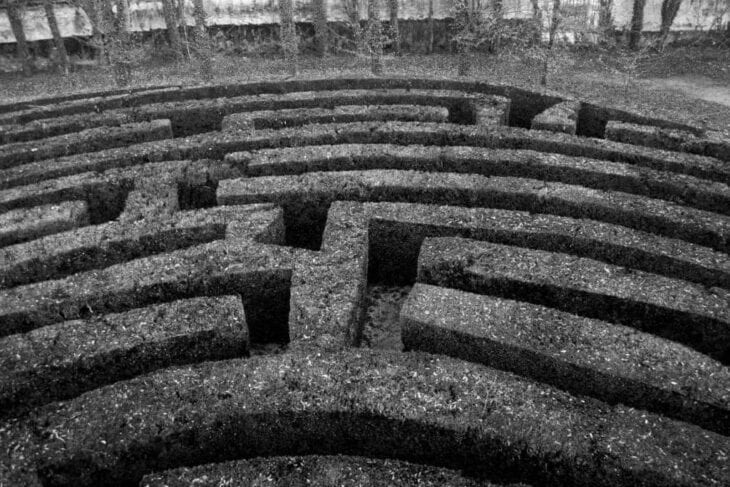 At long last – and at the moment he was to be poisoned by Medea, the wife of Aegeus who wanted the throne for her own son – Aegeus recognized the sandals and sword of Theseus, and knew him to be his heir.

Theseus and the Minotaur in the Labyrinth

Brave Theseus decided to stop once and for all the barbaric tribute to Crete that was demanded of the Athenians. To do this, he traded places with one of the seven young men in the sacrificial group to sail along with the seven maidens. Thus he came to Knossos, unbeknownst to King Minos. His plan was to enter the labyrinth with the others, find the Minotaur, and slay him.

Ariadne, King Minos’ daughter, fell in love with Theseus upon seeing him. She proved to be an essential ally. He revealed to her his plan, and she consulted with Daedalus, the original designer of the maze. He instructed her to advise Theseus to go ever forward and downward, to come at last to the heart of the labyrinth, where the Minotaur dwelt.

To ensure he found his way back out of the great maze, Ariadne gave him a ball of thread. He tied it to a doorpost on entering the labyrinth, and unraveled it as he went. As he set off, he promised Ariadne that if he returned victorious, he would take her with him when he left Knossos.

The Vanquishing of the Minotaur

The youths and maidens were to enter the maze unarmed, to be easy prey for the Minotaur. Theseus had hidden a dagger under his tunic though. By some accounts he found the Minotaur asleep, but nonetheless a great struggle ensued. Theseus was victorious, and all of the youths and maidens escaped the maze with him. He then fled with all of them, as well as Ariadne, and her younger sister Phaedra. 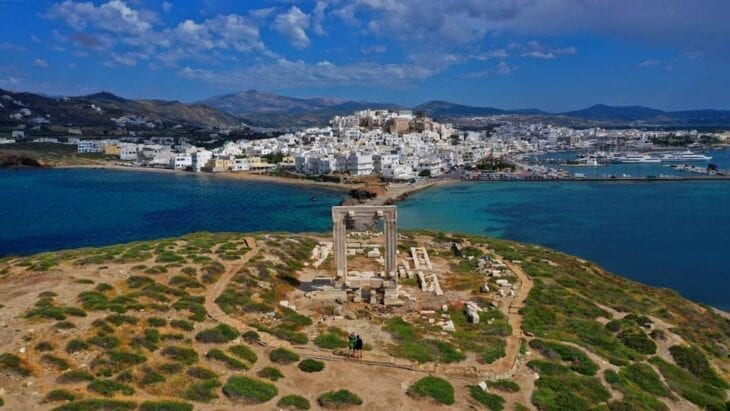 He seemed to tire of Ariadne, for he left her on the island of Naxos. But we should not feel too sorry for her, for the god of wine and ecstasy Dionysus found her there and married her. By some accounts – more favorable to the character of Theseus – Dionysus demanded that Theseus leave her on Naxos for him. Other accounts have Athena instructing Theseus to leave Ariadne on Naxos.

In any event, Theseus’ departure from Naxos was a hasty one. And in his haste, he forgot a crucial detail.

The Grief of King Aegeus

Before setting off on his heroic expedition in the labyrinth, Theseus had arranged a signal with his father the King. The ship set off with black sails. But if he were victorious, he would change the sails to white. Leaving Naxos, he forgot to do this. 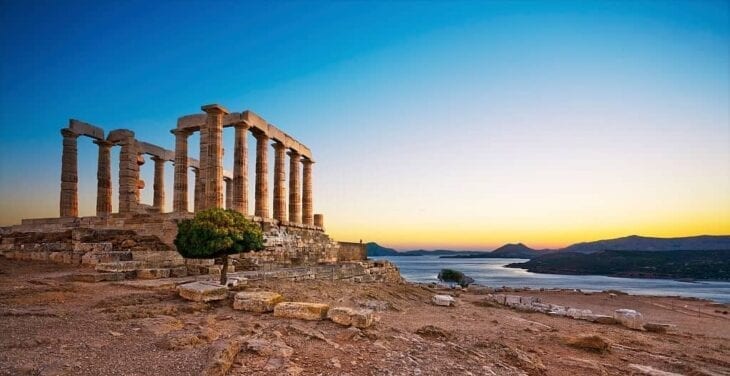 King Aegeus was scanning the horizon from Cape Sounion, where the great temple of Poseidon now stands. When the ship came into sight, its sails black, he thought Theseus was dead. Overcome with grief, he plunged into the sea and drowned. And this is how the Aegean sea takes its name.

Have you visited the mythical labyrinth of the Minotaur?