Everything You Need to Know About Aradena Gorge

One of the most spectacular and inciting natural sights of Crete is the gorge of Aradena, located in the southwest of the island, in a pretty remote area of the Chania province and a few kilometers from the village of Loutro. Aradena Gorge is very popular during the summer, yet it is not as crowded as the gorges of Samaria or Imbros. It offers you a unique opportunity to admire the astonishing landscapes and sights along the way, while also including a touch of adrenaline, given its several more daunting parts.

You will also get to encounter some interesting vegetation and animal life by exploring the canyon, while also discovering places like the fascinating abandoned village of Aradena. While the Aradena Gorge is quite long at 15 km, travelers usually only hike through half of it, from the bridge over the canyon to the sea, where the small Marmara beach can be found. 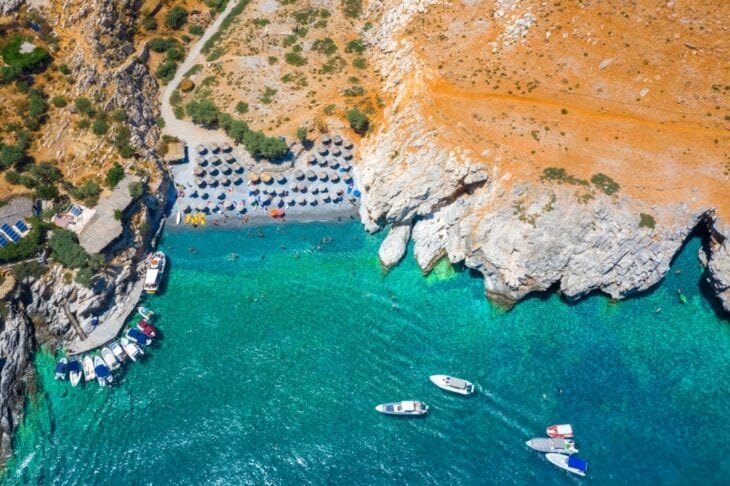 The splendid gorge of Aradena is located in the southwestern part of Crete, in the region of Sfakia and about directly south of Chania. The gorge starts high in White Mountains and goes all the way to the sea, at Marmara Beach and close to the village of Loutro.

The nearest important settlement is Hora Sfakion, which is about 10 km on foot from the beach and about 15 km to the village of Aradena through Anopolis. Several km to the west is the small village of Agios Ioannis. From the capital of Heraklion or from the city of Chania, you will have to rent a car and drive through most of the island.

How to Get to Aradena Gorge

Getting to Aradena Gorge by Car

When you arrive in Crete at the airport, you can easily reach Aradena Gorge with a car rental from Heraklion. The trip will take you through most of the island, but the landscapes you meet along the way are simply stunning.

Heraklion is about 160 km from the gorge and it will take you about two and a half to three hours, following the northern coastal road and then turning south and through the mountains. Considering the distance and remoteness of this area, renting a car in Crete is the best option. You can leave the car in the upper parts of the gorge, follow the trail to the sea and then return the same way or choose another trail. 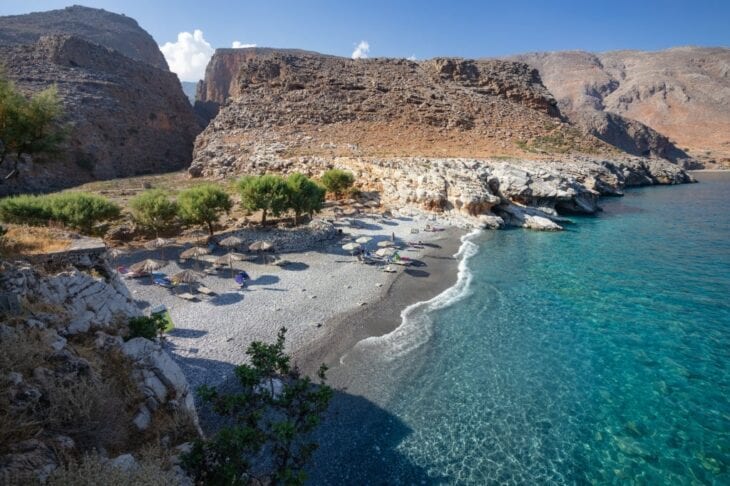 Getting to Aradena Gorge by Bus

Given is remoteness, it is almost impossible to visit the Aradena Gorge with a bus, the only option being to arrive in the Hora Sfakion from Chania and then find accommodation in Loutro or find some transportation to the start of the canyon.

Coming from Heraklion, you will most likely have to change a few buses and lose about a day traveling.

The best option is to book a car rental at Heraklion Airport and use it to get around the island, visiting multiple destinations.

Best Things to Do in Aradena Gorge

Aradena Gorge is among the most popular and fascinating natural attractions in western Crete and thousands of visitors are hiking through it each season. Nevertheless, it is not as crowded as other canyons in the area. You will most likely explore the gorge along the organized trail, although it is not as well maintained as it should be, with a few more challenging parts. 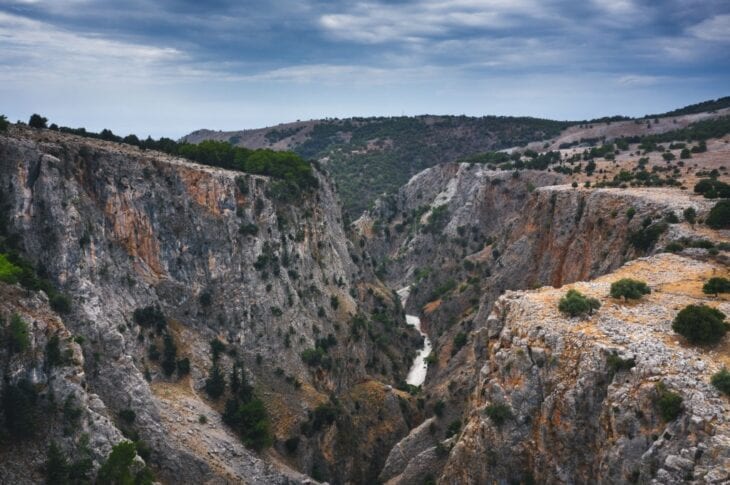 Aradena Gorge can be explored either way, the total length being about 7 km and the height difference about 600 meters. It takes around 3 hours to hike through, maybe a little less if you go downwards only. The start of the footpath is close to the iron bridge over the canyon, which offers dizzying views from below. This bridge is also famous for being used to bungee-jump into the canyon by daunting adventurers. A little further from the bridge, you can also pay a visit to the eerie village of Aradena that was deserted many decades ago and you can explore the deserted house ruins and church.

It is actually about 15 km long, with half of it going beyond the tourist trail into the mountains. Before it was organized better, it used to be a lot wilder, with visitors having to use ropes to get over dangerous overhangs. Today, anyone can explore it, but be careful if you suffer from fear of heights.

Along the way, you will be able to discover spectacular landscapes, with the steep walls rising high above and often blocking the sun, with several old churches hanging on the steep rocks, with old pathways used by shepherds that lead to other deserted hamlets, as well as the unusual vegetation that can be admired inside the gorge.

Upon reaching the end, you will exit right in the marvelous Marmara Beach, which although quite small, it is quite breathtaking, featuring sea caves and rock formations, as well as being organized and having a small tavern during the peak season. From here, you can take the 1-hour hiking path or a boat to the village of Loutro.

Explore other sights in the area

While the great majority of visitors only go through the organized part of the Aradena Gorge, some travelers venture upwards through the wilder part of it, climbing into the White Mountains (Lefka Ori). High into the mountains, it is believed that the gorge begins with the fascinating cave of Drakolaki, which is extremely rich in cave geological formations and an underground river runs through it. 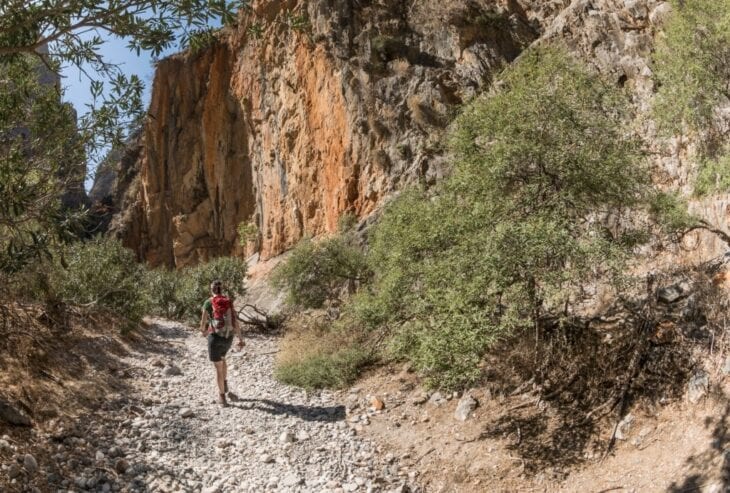 Although it is almost 2 km long, only the first 400 meters can be explored and with extreme care outside the rainy periods. Before reaching the iron bridge over the canyon close to Aradena village, you will also pass through the lush and beautiful plateau of Anopolis, where you can stop to discover the hospitality of this rural area and visit several interesting attractions. This used to be the site of the ancient city of Anopolis, whose remains can still be found throughout the village. Its port used to be known as Katopolis or Phoenix and its ruins can be discovered near the village of Loutro.

Around the area of Anopolis and Aradena, there are also several old Turkish towers, known as koules, including the ones of Anopolis, Agios Ioannis, Agia Ekaterini. Around Agios Ioannis, there is also an enchanting pine forest, with several hiking trails that take you to amazing viewing points towards the coast.

Also read:  Everything You Need to Know About Kourtaliotiko Gorge

Where to Stay near Aradena Gorge, Crete

You can choose from one of the charming villages that are located several kilometers from Aradena Gorge, with the option to find amazing and pretty remote beaches nearby. Nevertheless, there are only a few guest houses located in the villages of Anopolis and Agios Ioannis, most of them being booked many months in advance. Although located further away, it is a greater chance to find an accommodation option in Hora Sfakion or Agia Roumeli. You should definitely book early if you wish to stay in this quite spectacular, but remote area of Crete. 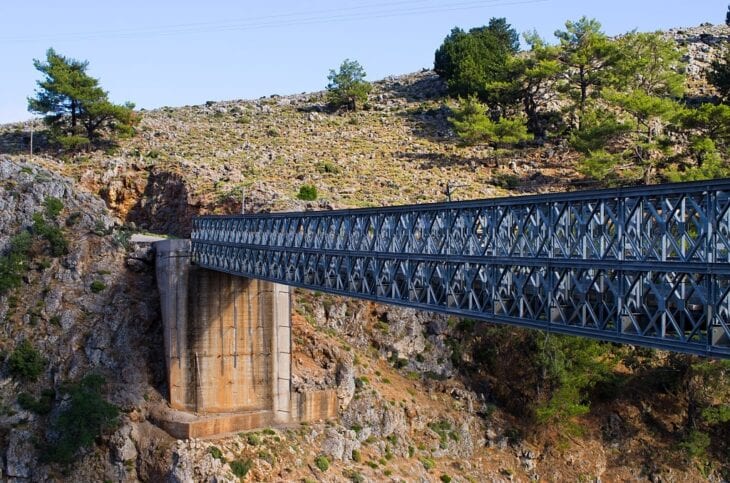 Located in the village of Anopolis, with easy access to the stunning beach of Glyka Nera, this comfortable complex was built on hill, offering superb views of the sea and the surrounding area, with excellent rooms that have all the necessary amenities, as well as large terraces.
☏ +30 698 508 0560
website

Located in the enchanting small village of Agios Ioannis, this traditional guesthouse features 7 individual rooms with two or three beds, exceptional natural design, a tranquil atmosphere and a small restaurant that serves breakfast and dinner. There are a lot of activities available nearby.
☏ +30 693 879 2695
website

Situated in the harbor of Hora Sfakion, two steps away from the beach, this nice hotel welcomes visitors with excellent rooms, studios and apartments, with kitchenette, balconies and sea views, an outdoor café and seaside terrace.
☏ +30 2825 091220
website 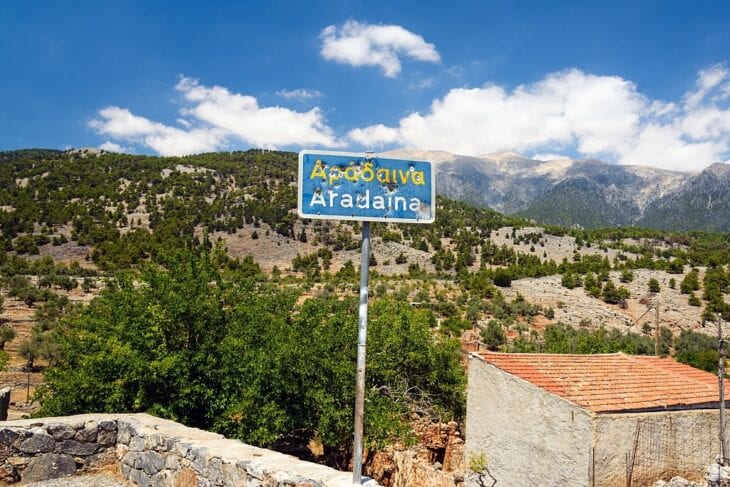 Where to Eat near Aradena Gorge

This charming little tavern is located right on the Marmara Beach, at the exit of the Aradena Gorge and offers delicious Greek food in a splendid atmosphere.
☏ +30 2825 772299
website

Located in a superb and remote area of the coast on the way between Marmara Beach and the village of Loutro, this highly appreciated family restaurant offers fresh traditional food.
☏ +30 2825 091520
website

This enchanting tavern is located in the pleasant village of Anopolis, offering a welcoming atmosphere and traditional recipes made from local fresh ingredients, including lamb and seafood.
☏ +30 2825 091169
website

Also read:  Everything you Need to Know About the Richtis Gorge in Crete

The best time to visit Aradena gorge is from late spring to early autumn, when you can get away from the sun and explore the gorge. During the rainy months, it is not advisable to venture into the canyon as the terrain can become slippery and flash floods can happen. 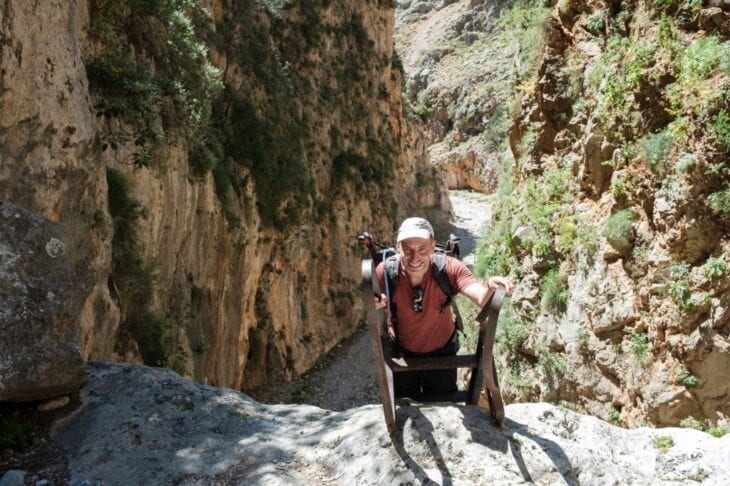 You can also explore the gorge in the heat of summer, as the high walls usually give plenty of shade. It would also be best to start the adventure early in the morning in order to avoid the midday sun.