Everything You Need to Know about Myrtos, Crete

For holidays that combine pristine nature, fantastic beaches, and plenty of local culture and cuisine in a relaxed and authentic setting, Myrtos (or Mirtos) is an excellent destination. It’s also a wonderful region to explore by car, with lovely villages, secret beaches, and beautiful drives. Here’s everything you need to know about Myrtos, Crete.

Where is Myrtos, Crete Located?

Myrtos, Crete is perfect for people really looking to get away. It’s located on one of Europe’s southernmost frontiers – the south coast of Crete, on the Libyan sea. Myrtos is in the Lassithi prefecture – the easternmost portion of Crete known for its pristine scenery and wild beauty. It is near the town of Ierapetra. 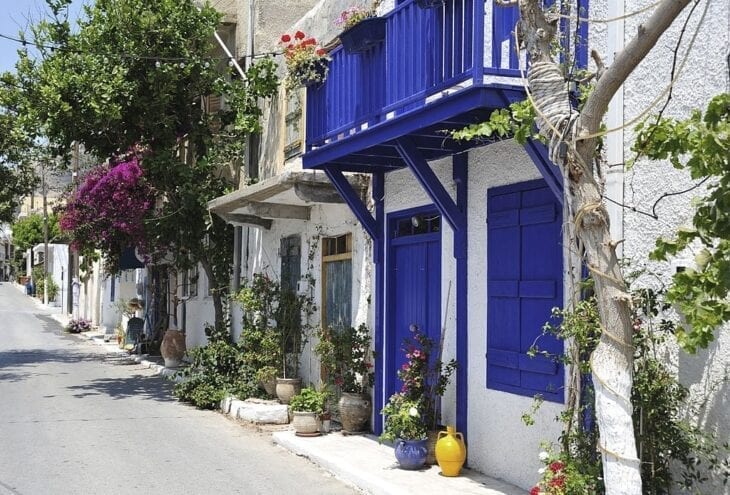 How to Get to Myrtos, Crete

Although it feels wild and remote, Myrtos is very easy to reach. A good road cuts diagonally through the island to the southeast, taking you straight to Myrtos by car from the Nikos Kazantzakis International airport in Heraklion in less than an hour and a half. If you are arriving by plane, you’ll find a car rental at Heraklion airport, so you can be on the road immediately after you land. If you are arriving by boat, a rental car at Heraklion Port can be waiting for you. The drive is gorgeous, and the destination region is really fun to explore by car. 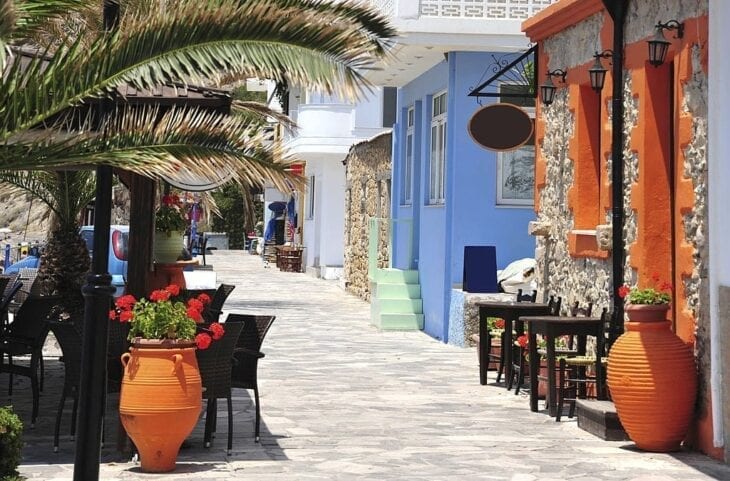 If you would prefer to travel to Myrtos by public transportation, you’ll find the schedule of the KTEL public bus company here.

The History of Myrtos, Crete

The area around Myrtos has been inhabited since Minoan times. The Minoans were the advanced Bronze Age civilization of Crete, who thrived from around 3000 BC until around 1450 BC, until finally disappearing by around 1100 BC. The Minoan settlement of Pyrgos, where you can see the ruins of Minoan houses, is on a hill above the coastal village of Pyrgos. There is also the settlement of Fournou Korifi near Myrtos. Myrtos itself is a village of the earlier 20th century. Like many prime spots along the Cretan coastline, a settlement here was not viable much earlier due to piracy. Also like much of Crete, this area suffered during World War II, with 18 inhabitants massacred by the Germans and the village burnt when the inhabitants refused to leave and turn it over to the German occupying forces. 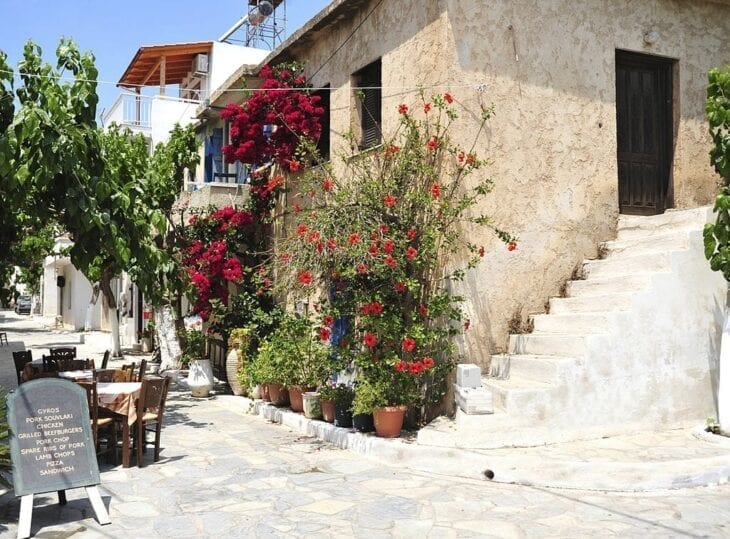 What to See and Do in Myrtos, Crete

Besides hiking up to the Minoan settlement of Pyrgos above the village, you can also visit the Myrtos museum, which houses both Minoan finds as well as folk arts and culture, to get a sense of the traditional life of the area. 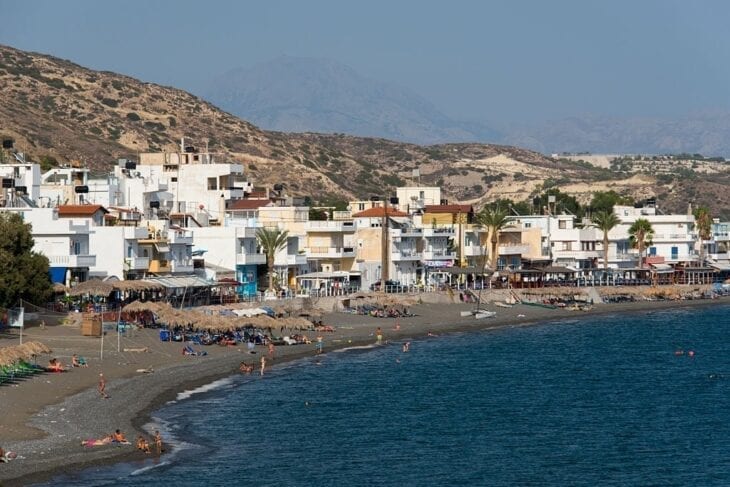 The village of Myrtos is a perfect place to enjoy a relaxing holiday. This is not a place for wild nightlife, but a great place to enjoy local life – in the traditional cafes and authentic tavernas. The village is charming and colorful and has true character.

The beach of Myrtos itself is a very well known beach that has been awarded the Blue Flag for purity of waters and also for environmental protection. The beach of Myrtos of silvery grey sands and crystal waters. The beaches on the south coast of Crete are known for crisper, cooler waters and usually less wind, as it is the north coast of Crete that experiences the most of the Meltemi – the famous winds. 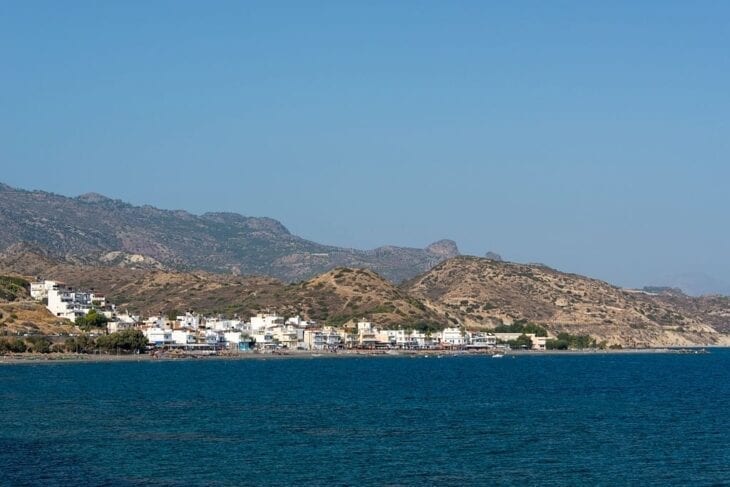 The south coast of Crete in fact is generally known for superb beaches, from organized, full-service beaches to wilder and remote ones. Near Myrtos to the east, you’ll find one of these wilder beaches, this one with small pebbles and tamarisk trees. Tertsa, less than 15 minutes to the west by car, is a small traditional village, quieter still than Myrtos. Here one finds not one but rather four beaches, each lovely. Some are full service beaches with sun-beds and umbrellas and a beach bar, while others are more remote (and rumored naturist friendly).

Also read:  Psari Forada Beach Sidonia: Where is, How to get there and what not to miss!

Continuing to the west brings you to Tsoutsouros, a fishing and farming community with a long and sandy beach. From here, continuing along the beach on foot will bring you to more remote beaches and beautiful secret coves.

A bit further to the west is Arvi, another excellent beach town. Arvi is built on the site of the ancient town of Arvi, and is actually famous for the tiny bananas of Crete, which are very aromatic. By Arvi, you’ll find some splendid secluded beaches, including Vahousianos Xerokambos, a cove of fine sands and pristine waters.

Also read:  Koudoumas Beach: Where it is, What to see and How to get there?

Gorgeous as the beaches of the south coast of Crete are, the landscape of Lasithi is also spectacular. There is some excellent hiking in the area. The walk up to the historic Minoan settlement of Pyrgos is an excellent hike that rewards one not only with history but also with dazzling views.

There are also some stunning gorges, such as the Gorge of Sarakina – also called the Myrtos Canyon. Just inland from Myrtos, by the village of Myrti, is the entrance to the gorge. It’s short in length – about a kilometer and a half – but big in impact. With a width of just 3 to 10 meters, and walls up to 150 m high, it provides plenty of drama. The Kriopotamos river (the name means “cold river”) flows through the gorge, heavier in winter and spring, and lighter in the summer. Be ready in any event to get wet – you need to walk through the river in some sections as you go through the canyon.

Ierapetra – the largest town on the south coast of Crete – is very close to Myrtos, just about 20 minutes by car. From here, you can catch a boat to go to Chrissi Island, which is about 15 kilometers from the southern shores of Crete. Chrissi is sensational, with silky golden sands and jewel-like waters. The island is covered with a rare species of Lebanese Cypress trees. The island is uninhabited, totally unspoiled, pristine, and wild – except for a small beach bar to get some refreshment..

Also read:  Koudoumas Beach: Where it is, What to see and How to get there?

While you are in Ierapetra, you’ll find plenty of things to see. Among them are the Kales – the Venetian fortress built by the Genovese in the early 13th century, the Tzami – the former mosque that was in turn previously the church of Agios Ioannis (the Ottomans added the minaret and the fountain outside), and the very small archaeological museum, which is in a former school for the Turkish children. 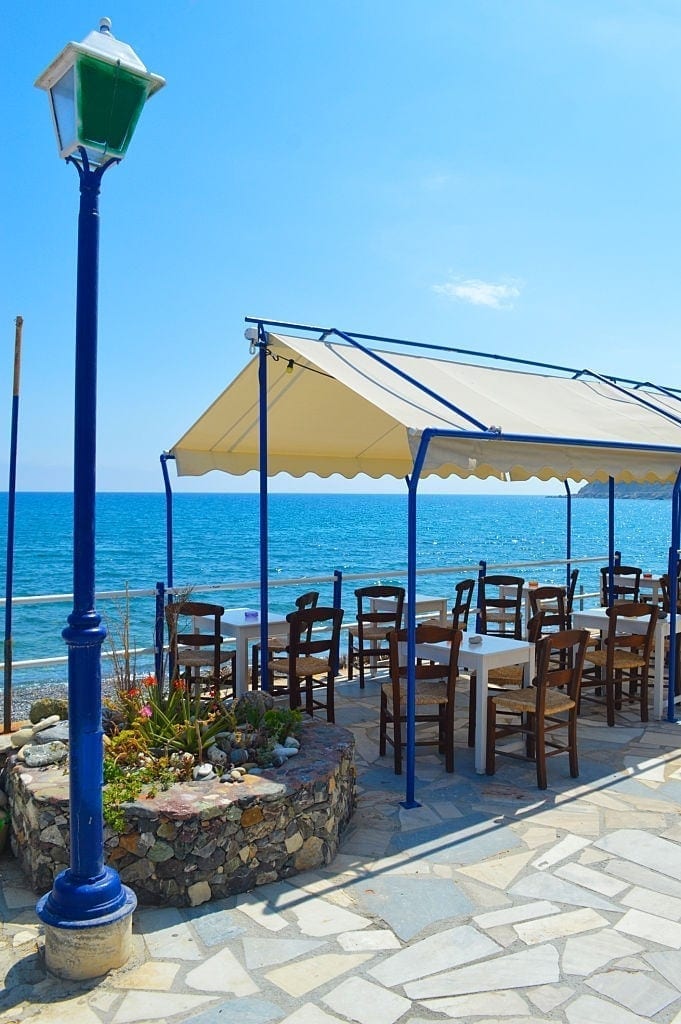 Crete has always been famous for its wines, with some local wineries cultivating ancient Cretan grape varieties. An excursion to a winery is a nice way to get in touch with Cretan culture and nature. The Economou Winery is about an hour and a quarter from Myrtos by car, in the Ziros plateau.

An hour and 20 minutes by car from Myrtos is one of the most sensational archaeological sites of Crete but of all Greece and indeed the world. The Minoan Palace of Knossos, excavated and vividly restored by Sir Arthur Evans in the early 12th century, is a top-notch cultural destination. It is in fact just outside of Heraklion, itself a fine destination for culture, including the main Archaeological Museum, rich in findings from the excavation of Knossos. While in Heraklion, one can also enjoy the Venetian sites, including the old Venetian harbor, the Morosini (“Lions’”) Fountain, and the Venetian Loggia. 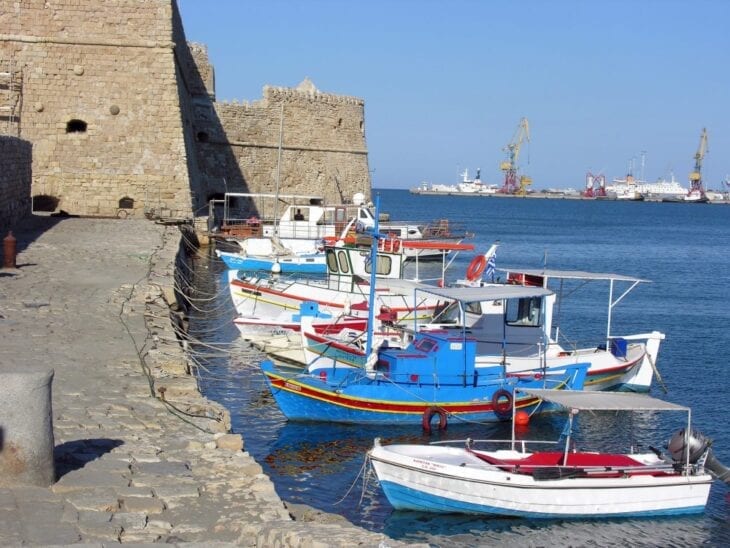 We hope that you will be exploring Myrtos, Crete soon. Until then we are at your service in bringing you inspiring content from the island of Crete.